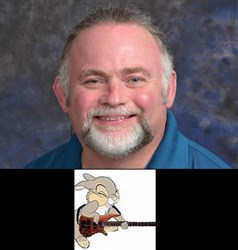 Bio
Michael was born and raised in New Jersey, and did not grow up in the church. A season of difficulty, followed by a season of blessing lead Michael to turn his attention to the Lord at the age of 36. His first love was music, and Michael continues to sing and play guitar as part of his ministry. Prior to being called into pastoral ministry, Michael was a warehouse worker, appliance salesperson, and part-time musician/country band leader.
Michael accepted his first appointment in 2015, as a youth pastor at First UMC of Punxsutawney. From 2016 until 2021, Michael has served the Buffalo Charge U. M. Churches in the Butler District. He was excited to return to the Indiana District to begin serving the Faithful Followers Charge in July 2021. Michael is now in year two at the Faithful Followers Charge, and he and Debbie are blessed to continue the relationships that have begun here.
Michael lives with his wife Debbie, who is the most excellent cook he knows. They have 4 cats: Jenny, Lexie, Chloe, and Brick.
People