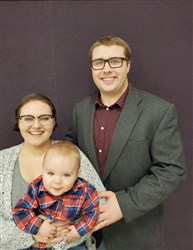 Pastor Cox has served the Cooperstown Charge since July of 2019.
Before coming to Cooperstown Church and Bethel Church Pastor Cox, served as pastor of the Lake City United Methodist Church. He also served as the youth minister at Park United Methodist Church.​ Before that, he was heavily involved in the leadership and ministry of CRU at Penn State Behrend.
Pastor Cox is a graduate of Erie First Christian Academy in Erie, Pa, and earned a Bachelor of Science Degree from The Pennsylvania State University, Erie The Behrend College. During his time at Penn State Behrend, under the ministry and guidance of Reverend Dan Owen, Pastor Cox discerned the call into pastoral ministry.
In 2017 Pastor Cox entered into Northeastern Seminary full-time, transferred to Pittsburgh Theological Seminary full-time in 2019, and plans to graduate with a Master of Divinity in 2022.
Holding to Wesleyan theology, Pastor Cox believes strongly in Christian tradition and in the power of the Spirit to work in our lives. He believes strongly in the power of the Means of Grace, especially in acts of Mercy. He considers his ministry and appointments to have affirmed his call to ministry and deepened his relationship with Christ and his church.
In 2017, Ronnie married the love of his life, Jamie. Pastor Ronnie and Jamie are now the parents of their first child Ezra(9 months), as well as their 2 dogs, Perry and Cole, and their cat Violet.
Pastor Cox enjoys playing with his pets, kayaking, playing video games, woodworking, and spending time with his beautiful baby boy in his spare time.