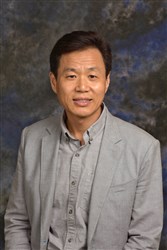 Duk Hee Han
Born, Raised, & Educated: Duk Hee is an ordained elder. He was born in 1966 and brought up in a small country village in Korea as the youngest among three sons. The most important influence on his character has been his parents, who were devout Christians. Though his parents were farmers in the countryside, they implanted conviction and courage to practice the love of Jesus Christ in his life by means of their examples. Duk Hee graduated from the Methodist Theological University in 1993 with a degree in theology. He then earned his master’s degree from Wesley Divinity School in 1998, and his doctorate degree in ministry from Union Theological Seminary in 2001.

Pre-Church Work Experience: While at college, Duk Hee did not only concentrate his efforts on accumulating academic knowledge but also devoted himself to helping the underprivileged such as orphans, blind children and tuberculosis patients with some like-minded friends. After graduation, he was engaged in mission work in Zambia, Africa. It was a valuable time for him to establish his own conviction and philosophy about overseas mission based on the Incarnation of Jesus Christ. He was convinced that effective mission depends on the attitude of the missionary which can absorb other cultures and thought and establish good partnership by mixing with the local people. After a year in Zambia, he changed his mission field to the Philippines in 1995. When he got his doctorate there he taught Christian Leadership and Church Administration at Wesley Divinity School for a year. Through his teaching experience, he came to further develop his own leadership skills and he came to better understand the importance of respecting others' standpoints in trying to carry out God's mission effectively in foreign countries. His 8 years of experience in working with different people in Zambia and the Philippines as a missionary provided him with proficiency in English and enthusiasm for serving God's people regardless of gender, race, nation, color, and possessions. In 2002, he came back to Korea to serve a local church which had about 1,000 membership as an associate pastor. While he was serving the church, he was asked if he was interested in serving a church in the Western Pennsylvania Annual Conference which had a sister relationship with the Central Annual Conference of the Korean Methodist Church. As a result, he received an appointment from Bishop Hae-Jong, Kim to serve a local church here in WPA and he has been privileged to serve God through the UMC since 2004. Having been a pastor in America for 16 years, he has really enjoyed working with God’s people and has learned a lot about culture, ministry, mission, and administration, which he believes, will help him in demonstrating his leadership to the full in his future ministry.

Family & Personal Interests:
Duk Hee married his soulmate Eun Young in 1999. She majored in music education and piano at Ho Seo University in Korea. She had served her own church in Chunan, Korea for 10 years as a pianist before she was united with Duk Hee. He has two sons: Kyu Hyung, 20 years old, sophomore in college, and Kyu Hyek, 17 years old, senior in high school. They like sports, music, and art. Kyu Hyung plays violin and Kyu Hyek plays cello and they can speak Korean and English as well. Duk Hee likes singing, spending time with family and friends, gardening, and playing golf.