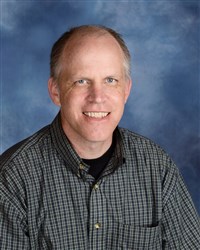 Bio
Eric Leonard was born and raised in Rockford, Illinois. At the age of 13, his family relocated to Murrysville, Pennsylvania. He graduated in 1989 with a Bachelor of Science in Marketing from Penn State University. For the next six years, Eric worked various jobs in the private sector. From 1995 to 1998, he attended Pittsburgh Theological Seminary and graduated with a Master of Divinity.

His gifts center around the traditional shepherding roles of preaching, teaching, administering, and pastoral care. He believes that disciples are formed through vital worship, active small groups, and hands-on ministry.

Eric and his wife, Barbara, have been married since 1992. They have four children, two born near the end of the 20th Century and two born at the beginning of the 21st Century.

A good Sabbath day off might include a good bike ride, a good book, and a good burger.
People