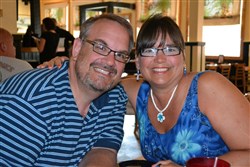 Joel has worked in education for the past 30 years as a school psychologist and coordinator of special education services. Previous employment has included working as a therapist on an inpatient psychiatric facility and working as a Mobile Therapist and Behavioral Specialist Consultant for various mental health organizations. As a Licensed Local Pastor, Joel was assigned to the Albion Heights UMC for since July of 2015. Starting in July of 2020, he also began pastoring the St. Phillips UMC in Big Run, PA. The churches merged and in August of 2021, the new congregation of Solid Rock Community Church began its work towards advancing the Kingdom of God.

Joel and his wife Kimberly work as a team at Solid Rock Community Church. Primarily, they have a heart for discipleship. They especially want to reach the unchurched for Christ. Presently, about a half  of the current congregation were unchurched people and have only been attending since January of 2021. Joel and Kimberly value helping people find a meaning and purpose in life. At the heart of their  ministry are three core beliefs: the church should be based on the inspired Word of God, the church should be community where everyone works together to meet needs, and finally, church should be fun. Joy and laughter should be part of every group operating in the church setting.

After dating his high school sweet heart, Kimberly, for six years, Joel married her in June of 1986. They have four boys. Nathanael is married to Holly and have three children. Nate is a full elder and is assigned to the Otterbein UMC in Pittsfield, PA. Isaac is married to Monica and works for Raytheon Corporation in Tuscan AZ. Caleb is a provisional Elder assigned to the Clymer Charge and also has a college ministry at IUP out of Grace UMC in Indiana PA. Luke is married to Caroline next month, finds employment in youth ministry at East Main Presbyterian Church in Grove City, PA and oversees the physics laboratories at Grove City College.
People