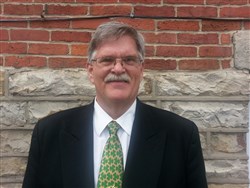 Bio
I was born in Birmingham, AL and raised there until 1968.  We then moved to Mobile, AL where I sang in the choir, joined Navy JR ROTC and played football.  I was my junior class president.  In 1970 my family moved to Johnstown, PA where I finished my senior year at Westmont High School.  I went Penn State University and graduated with a BA in Theater.  After trying different jobs In 1976 I began working in broadcasting, first in radio and then TV.  I was baptized as infant in the Episcopal church in Alabama.  In Johnstown we attended St. Mark's Episcopal Church.  I was married in 1978 and shortly after began attending the Worldwide Church of God.  I would say that church was a cult.  Instead of Christmas and Easter we kept the Jewish Feasts and followed the Jewish Holy Calendar.  I left that church in 1991 and began attending and eventually joined Calvary United Methodist Church in Johnstown.  I began taking lay speaking classes and in 2001 began the ministry inquiring process.  My first appointment was as a supply pastor in July 2002 at Park Avenue UMC.  I served there for 8 years as I pursued my MDiv from Pittsburgh Theological Seminary.  I graduated in 2007 and began my provisional training.  I was ordained in 2010 while serving a five point charge in Elderton. I took a leave of absence to try to save my marriage but we were divorced and I returned to serve Calvary UMC in Somerset, PA.  I have now been there for 10 years.
People