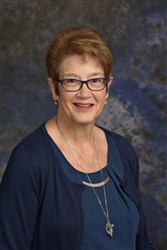 Bio
Linda was born and raised in Johnstown, PA.  She is a second career pastor after retiring from UPMC Lee Regional Hospital in 2003 and Conemaugh Memorial Medical Center in 2012, serving as a manager and then Director of Patient Access.  Upon graduation from Johnstown Central High School she attended Indiana University of Pennsylvania studying music as a voice major and later received her associate degree from Colorado Technical University.
She has led a life of faith since her childhood, first serving God in music ministry before her call to pastoral ministry. She completed Licensing School in 2003 and was appointed as a Licensed Local Pastor in 2005. She has served part-time at Conemaugh First and Beaverdale as an Interim before being appointed to Hastings-Bakerton Charge as a full time Local Pastor. After retiring as a pastor, Linda was appointed part time in retirement, continuing at Hastings-Bakerton Charge. In 2020 Linda was appointed to the United for God Cooperative in Johnstown and in July 2021 moved to the Northeast Somerset Cooperative as an Associate Pastor serving Windber Calvary UM and Central City UM. In July of 2022 she returned to the United for God Cooperative in Johnstowon.  In 2017 Linda completed the Course of Study at the Methodist Theological School of Ohio (MTSO).
Linda is the mother of three children: Chad, Kelly and Cory, grandmother of six: Kyra, Brandon, Delaney, Dalton, Alex and Tristen, and great-grandmother of three: Brooklyn, Easton and Savannah. She loves visiting and being “Grandma and Gigi” to all of her kids.
Because of her love of music, Linda decided to learn a new instrument and has recently started studying the cello and renewing her interest in playing the violin.
Through her faith she knows that His grace is sufficient as she works to share the love of Jesus Christ to all around her. She feels blessed by God beyond measure.
People