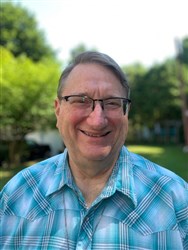 Bio
I was born in Grove City, PA September 20, 1959, the second son of Franklin and Mary Lou Carr. For most of the first 3 years of my life we lived on Main Street in Slippery Rock, PA right across from the college campus. In August 1962, we moved to Bethel Park when my father began a new job as a Guidance Counselor at Upper St. Clair High School.
1977 graduate of Bethel Park High School, 1981 Graduate of Grove City College - BA (Religion), 1984 graduate of the Methodist Theological School in Ohio - M.Div.
While in college, I worked one year as a lab assistant in the Physical Metallurgy lab at GCC, I also filled in occasionally working overnight dorm security. The summer before my Junior year of college I worked doing summer maintenance at Bethel Park High School. The summer before my Senior year of college, I was a summer Intern assigned to McMasters UMC in Turtle Creek (Pittsburgh East District) working with senior pastor Victor L.Brown. It was at the summer evaluation week at Jumonville that Dr. Clair Lundberg first asked me: "Tom, have you ever considered pastoral ministry as a career?", to which I responded, "No!" And he then told me, "Well, I think you ought to!" That began the evolution of my discernment my call to ministry 40 years ago in August 1980.
I have been married to Leah since 1984. We are the parents of two grown daughters (Lynnette and Krista) and the grandparents of a 9 year old boy (Alex) and a 3 1/2 year old girl (Amelia). Lynnette and her husband Chaz were married in October 2010. Krista is currently engaged to Gerald and they anticipate an October 2021 wedding.
I have served as a pastor for 39 years, including two years as a Student Local Pastor in New Garden, Ohio on the Steubenville district of the East Ohio Conference. Most of my years as a full-time pastor have been while serving two or three point charges (25 1/2 years). I long have had a passion for the small membership church and am keenly aware of its historic and current challenges, strengths, and weaknesses.
Appointments: 1982-1984 SLP at New Garden UMC, East Ohio Conference
1984-1987 FD at Fairmount and Zion UMCs (Washington County) on the Washington District
1987-January 7, 1989 FE at Wesley Chapel UMC (Somerset County) on the Connellsville District
January 8, 1989-1997 FE at Koppel, Clinton & Homewood UMCs (Beaver County) on the Butler District
1997-2004 FE at West Elizabeth and Elrama UMCs (Allegheny County) on the Pittsburgh East District
2004-2011 FE at West Elizabeth, Elrama, and Glassport UMCs (Allegheny County) on the Washington District
2011-2021 FE at Reynoldsville: First UMC (Jefferson County) on the Indiana District
2011-present FE at Oil City: Trinity, Bethel, & Plumer UMC (Venango County) and Franklin District Ministry Assistant
I have served throughout my years of ministry in various District positions, including as Chair of a District Young Adult MInistries, a part of a District Mission Festival Committee, Secretary of a District Committee on Ordained Ministry, a District Disaster Response Coordinator on two different districts, and Chair of a District Superintendency Committee. I also served for several years on the Board of Directors of the Conference Credit Union and as Chair of the Supervisory Committee of the Credit Union.
I am a highly relational individual and pastor, with all the strengths and weakness that go along with being such.
My hobbies include enjoying movies (especially old and classsic movies), woodworking and scroll saw, music (still blow sour notes from my old trumpet occasionally), slot car racing with my grandson, some interest in model railroading.
People