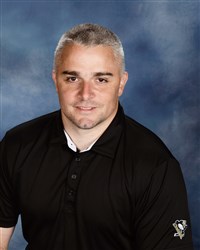 Bio
I was born and raised in Johnstown, PA.  I went to Richland High School (1992), the University of Pittsburgh at Johnstown (1996) and Asbury Theological Seminary (2003).
Before becoming a pastor I worked on a farm as a teenager, for D. Edward Leasing in the trailer yard.  In college I worked at KMart, PharMor and Lowe's.  I also worked for a landscaper and did some landscaping work on my own.  I worked my way through seminary as a custodian.
I served as an Associate Pastor at the First UMC in South Fork from Nov. 2003-June 2004
I served the Fishertown Charge from July 2004-June 2009
I served the Otterbein UMC in Connellsville from July 2009-June 2013
I have served the Purchase Line UMC from July 2013- Present
I have been married for almost 23 years to Bridget.  We have homeschooled our two kids, Renee (19, graduated in 2019) and Elliott (17, also a Junior at ICTC).  They both play(ed) soccer for Indiana High School.
I love sports and currently play baseball, soccer and hockey.  I also coach the baseball team at Purchase Line High School and am a volunteer assistant with the Jr. High Football team at PL.
People