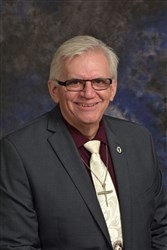 Bio
I was born in Johnstown Pennsylvania, and raised on a small farmette near Seward Pa.
I was educated at United High School and graduated in 1978. After High school I worked for Blairsville Machine Products, later known as Specialty Bar Products making parts for tank tracks.
I began attending the Armagh United Methodist Church in the mid 1980's where I served on several committees and taught an adult Sunday school class. I felt the call to ministry while working on the Disciple Bible study and later committed myself to entering the ministry in the early 1990's.
To pursue the ministry I enrolled into classes at IUP where I graduated with honors with a double major in psychology and religious studies in 2001.
My first appointment was to Mt. Olive Johnstown where I served for 1 1/2 years as an exploring candidate, I then committed myself completly to entering the ministry and quit my secular job to go to school and become a minister.  I was appointed to the Timblin Charge (Timblin, New Salem, Porter) where I served for 5 years till my graduation from college.  My next appointment was in East Ohio Conference at Paradise Hill in Ashland, OH where i attended seminary at Ashland Theological where I graduated in 2006. I was returned to Western PA to serve Sheakleyville Charge (Sheakleyville, Old Salem, North Salem) from 2006 to 2012. I was then appointed to Albright in Connellsville. This church was placed on a charge with Pleasant Hill, and later formed into a Co-Op in 2019 with 12 churches (now 11). The present Connellsville Cooperative Parish consist of Albright, Otterbein, Greenwwod, Wesley, Pennsville, Normalville, Pleasant Hill, Calvary, Mill Run, Ohiopile, Davidstown, Mt. Salem.
Beverly and I have been happily married since 1980 and have a dog and cat at home.  We have three grown children; my daughter Lindsey and her husband Justin Olexa live in our old house in Seward with our two granddaughters Morgan and Aubrey, Our son Michael is living in the Greensburg area and our son Matthew, a postal worker, lives with his wife Victoria in Hadley, Pa.
I enjoy going for long walks, spending time with Bev and my pets, reading, and drawing.  I also enjoy movies and reading comic books to relax. I look forward to spending more time in Christian service and sharing the love of Christ with others.
People