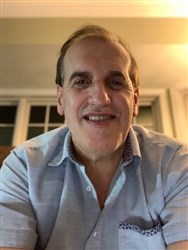 
Rev. William “Bill” J. Blair currently serves Grace: Indiana.  Previous appoints were HOME, Titusville first and Connellsville DS.  He is a graduate of the University of Pittsburgh and Asbury Theological Seminary.   Bill received the Denman Award for Evangelism, served thirteen years as camp dean and on the boards at Wesley Woods and Jumonville as well as three DCOM teams since 2003.  He has led, and/or participated in scores of international and Domestic mission trips.
Bill was raised on a dairy farm and continued there after high school for ten years.  He had a life-changing profession of faith at age twenty-four and responded to a call to full-time ministry at age twenty-nine.  He continued farming until he received his undergraduate degree and then left the fields behind him for ministry.
Bill is married to his beautiful, supportive wife, Beth, since 1986.  The Blair’s are parents to four children, Shanda (married to Westley), Jordan, Ryan and Preston, and have one grandchild.   Bill enjoys a sense of humor, likes action movies, gardening, carpentry and hunting.
Bill treasures both traditional and contemporary music and his favorite Bible verse is Romans 8:38 “And I am convinced that nothing can ever separate us from God’s love.”
People