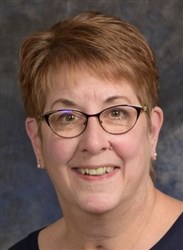 Bio
I was born and raised in Latrobe, was very active at Latrobe First UM. I graduated from Greater Latrobe High School and attended Edinboro Sate College where I pursued a duel teaching degree in Elementary and Early Childhood Education. I met my husband Lynn while at Edinboro. We married in January 1975 shortly after my graduation and moved to Elizabethtown in Lancaster PA where Lynn was a teacher.We built our first home there and Courtney and Douglas, our first two children were born in Lancaster.
We found ourselves missing our families so in 1979 we moved back Lynn's home area to purchase Lynn's grandparents homestead in the middle of a potato farm between Corry and Union City PA. We had two more children, Scott and Amy along the way. I worked a lot as a substitute teacher for the school districts in the area. Family life, substitute teaching and church involvement kept me busy. I was privileged to serve a term on the board at Olmsted Manor. The Manor became a special place to me where I felt God's presence and peace in difficult moments. The challenges of caring for a big old home like the Olmsted Manor were familiar to me since Lynn and I also have have grown accustomed to making renovations to our big old house. Those lessons and the support of our church friends and family were a blessing after the tornado of 1985 caused major damage. It took great patience and prayer living through those months but God is faithful. We celebrated our home's centennial anniversary in August of 1996 complete with a house blessing by Pastor Mark Ongley who was our associate pastor at Corry FUM.
Pastor Russ Hines and Pastor Mark were instrumental in my beginning to listen to God's plans for my life. They encouraged me to become the director at the new Love In the Name of Christ ministry in the Corry, Spartansburg and Union City area. I worked for Love INC for ten years along with a couple of years at LifeCare Pregnancy and Family Resource Center. Each step brought me closer in God's plan. The biggest step came as the Administrative Assistant at Corry FUM. I served as Lay Leader and delegate to Annual Conference. At one conference I found a flyer about a new lay servant program Certified Lay Minister. It was an opportunity to serve and remain Laity. I went through the training and became a CLM and was called to serve in pastoral ministry at a new four point charge with Elgin, McCray, Wayne Valley and Evangelical UMC's. I loved serving as a CLM but felt I was missing something. In 2015 I was offered a three point charge with the Titusville Charge - Bethel, White Oak and Pleasantville UMC's. I attended licensing school at Olmsted Manor and began the journey of Course of Study at Spring Heights in West Virginia.I never thought I'd be going back to school and looking at retirement too. God has a sense of humor and  heart full of grace.
God has been my rock in times of trial; Lynn's liver transplant, job losses and life changing moments. God is always with me.r I am always amazed and blessed.