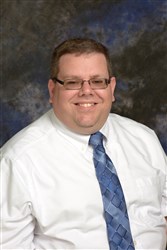 Bio
Clint grew up in the town of Arnold north of Pittsburgh along the Allegheny River and lived there until shortly after he married his high school sweetheart, Karla. Clint was called to ministry at a young age, but he ultimately pursued other passions in college. After he and Karla were married in 2002, they moved to Latrobe, PA where they began their family and he would soon know his calling once again.

Clint began his college work at IUP in 1997, but after time off from his studies and 10 years in retail management, he answered the call into ministry. Clint returned 13 years later to finish his BA in theater and graduated in 2014. He then moved to United Theological Seminary and finished there in 2017 with a Master of Divinity. Clint started as a local pastor in 2014 and became a provisional member in 2018. Clint was ordained as an elder in the UMC in June 2021.

Clint served as an associate pastor at Bethany United Methodist in Latrobe for 2 years focusing on youth ministry. Since then he has served at Greensburg Trinity and Jeannette First Charge and Punxsutawney Cross Town Ministries. Clint is currently serving as the pastor at Mt Zion DuBois. Clint has also served on the Conference Young Adult Committee as well as Trustees, Building and Locations and Youth Committees in the Indiana District.

Clint has a passion for music and theater arts and enjoys using them in ministry. In addition to his wife of 19 years, Karla, his family includes their 13 yr old daughter, Sarah, and their 9yr old son, Isaiah.
People