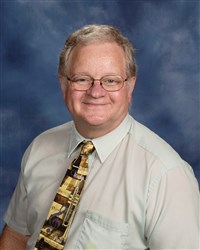 Bio
Born and raised in Corry, PA, Bruce Davis graduated from Corry Area High School before attending Asbury College (now University) for a Bachelor of Arts in Psychology. He then attended and graduated from Asbury Theological Seminary with a Master of Divinity.

In addition to his appointment, Bruce has served on committees for camping retreat ministry, missions, education, and renewal fellowship. His passions and gifts for ministry include camping and teaching. In his spare time, Bruce likes to swim, travel, and read.
People