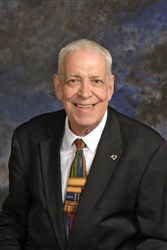 Bio
I was born, (April 22, 43) and raised a Methodist/ United Methodist.  I was influenced by my grandmother as she taught a ladies class in the Moorhead Methodist Church in Brockway.
We moved to Brookville in 1951 and we joined the Methodist Church and my 3 siblings and I were baptized there.  I learned a lot from Rev. Epler as I was constantly asking him questions.
After dropping out of school my sophomore year in Brookville, I enlisted into the U.S. Air Force in 1960.  After 4 years of service I worked  in the trades including over twenty years in the building maintenance department of the DuBois Regional Medical Center.  While there I met Pam.  We were married on June 5th 1993.  At pre-marital Counseling, Feb. 1993, Pastor Clinton led me to the Lord.  I knew Jesus all my life but it wasn’t until I was 50 that I came down out of the tree. In a short time I was teaching adult class of Sunday School and tagging along with Pastor Clinton as he did evening services.  About this time he ask me to write my Faith Statement. After reading it he said there was little or nothing about “end times.”  So I sent to Liberty University for a home study course on “Daniel and Revelation.”  Also, in order to help myself in my employment at the hospital, I took distance learning courses from Penn State in Economics, Business Management and Accounting.
From March of 2003 to 2008 I was the Pastor of Kelly Town Union Church, ( I was Ordained there),  and from June of 2006 to June of 2012 I was the Pastor of the Boone Mountain Emmanuel Church, Sabula.
In March of 2013 I returned to Methodism.  My wife and I joined the 1st UMC of DuBois, she transferred from Sabula and I from Brookville First.  Then I began taking lay courses. The priority ones and then some extra, teaching some.  I began the Candidate Process and then Licensing   School in spring of 2017.  My first appointment came July 1st of 2017 as associate pastor at the Glasgow Larger Parish and a year later as senior pastor.  I am now the associate pastor at the Grampian 4 Point Charge.  In keeping with the educational requirements of a Licensed Local Pastor, I am enrolled at United Theological Seminary in Dayton Ohio. I am currently taking my 6th  course of 20.
People