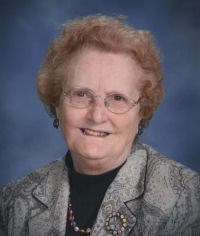 Born Aug. 15, 1928, in Pittsburgh to the late Floyd N. and Leah Coleman Henderson, Mrs. Wilson worked for a short time in the Children's Hospital Records Department in the 1940s, but her most important job was as homemaker and mother.

She was a member of the First United Methodist Church of Butler and belonged to the Dorcas Circle, Quilters Group, Asbury Sunday School Class, and the 3M's there. She was also active in the Butler Blind Association. Esther enjoyed knitting and taking care of her family.

In addition to her parents, she was preceded in death by her dearly loved husband Rev. David D. Wilson, who she married on June 9, 1948, infant twin sons, William James and Mark John Wilson, and two brothers, Floyd N. Henderson Jr. and Thomas C. Henderson.

Visitation was scheduled for Tuesday evening Nov. 29 and Wednesday, Nov. 30 from 2 to 4 and 7 to 9 p.m. at the Thompson-Miller Funeral Home, 124 E. North St., Butler. Funeral services will set for 11 a.m. Thursday, Dec. 1 at the First United Methodist Church, 200 E. North St., with the Rev. Eric Park officiating.

A private burial was to be in the South Fork Cemetery.

Online condolences can be given at www.thompson-miller.com.