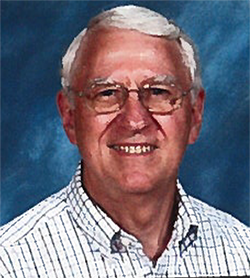 Born March 19, 1944, in Titusville, Pa., a son of the late G. Stanley and Milly Ensle Vanderhoff, he graduated from Rocky Grove High School, Cleveland State University with a degree in electrical engineering and Ashland Seminary with a master of divinity degree.

Rev. Vanderhoff worked at Westinghouse and General Electric before answering a call to ministry. He served as a pastor for 32 years, retiring from Heritage United Methodist Church in Ligonier in July of 2008.

Rev. Vanderhoff became a member of the Western Pa. Conference of the United Methodist Church in 1978 and was ordained an elder in 1980. He served the Valley UMC in Conneautville from 1978-89 and Grove Ave. UMC in Johnstown from 1989-2000 when he was appointed to Heritage UMC. In his ministry, he particularly enjoyed discipling new believers and leading Bible studies and worship services.

He was a man of deep faith in Jesus Christ and had an abiding love for his family and his God. He served as dean of sailing camp at Camp Allegheny for over 20 years. He loved his wife and enjoyed spending time with his extended family, sailing, fishing, camping, reading and helping others.

Family and friends will be received from 2 to 4 and 6 to 8 p.m. Thursday at the SNYDER FUNERAL HOME INC., 402 E. Church St., Ligonier. A funeral service will be held at 10 a.m. Friday at Heritage United Methodist Church with his son, the Rev. Jeffrey A. Vanderhoff, and his son-in-law, the Rev. Andrew Verner, co-officiating. Internment will be in East Troy Cemetery, Titusville.

In lieu of flowers, memorial contributions may be made to Valley Youth Network, P.O. Box 303, Ligonier, PA 15658.