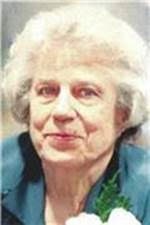 Beulah Ruth Uhrin, 79, of New Bethlehem, wife of the Rev. John Uhrin Jr., went to be with her Lord on Sunday night, April 3, 2016, surrounded by her loving family, following a yearlong battle with pancreatic cancer.

Born June 14, 1936, in Collins Center, New York, she was the daughter of the late Rev. George H. Schroder and Catherine B. Wermuth Schroder.

She graduated from the Rushford Central School in Rushford, New York, in 1954 and received a full scholarship to attend Roberts Wesleyan College in North Chili, New York, graduating with a bachelor's degree in 1958. Beulah furthered her education with a master's degree from the University of Rochester. She taught mathematics in the Gowanda, New York, school district for several years and was a substitute teacher in many of the school districts in which she had lived.

Beulah enjoyed solving crossword and sudoku puzzles, knitting, canning and freezing the bounty from the garden.

She delighted in finding her spring crocuses, daffodils and lilacs blooming, her daily devotional Bible studies, keeping in touch through the Internet with her grandchildren and great-grandchildren's activities and accomplishments and spending time with her husband at their camp in East Hickory.

In addition to her parents, she was preceded in death by an older brother, Clarence Schroder.

Funeral services were held at the First United Methodist Church in New Bethlehem on April 7 with the Rev. Loye Starzell officiating. Interment was in the Oakland Cemetery, Mahoning Township, Armstrong County.

Memorial contributions may be given in the name of Beulah R. Uhrin to the First United Methodist Church, 234 Penn St., New Bethlehem, PA 16242, or Heifer International , an organization dedicated to ending hunger and poverty, at 1 World Ave., Little Rock, AR 72202, or online at www.heifer.org.

Online condolences may be sent to Beulah's family at www.rupertfuneralhomes.com.