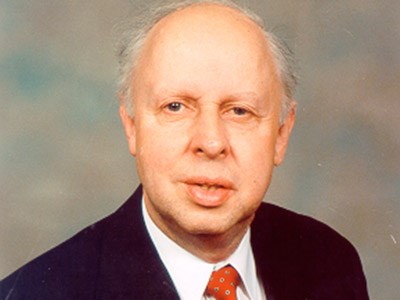 The Rev. George E. Tutwiler, 81, died peacefully in Pittsburgh  April 16, 2020. George served as organist/choirmaster and instructor in church music and United Methodist Studies at Pittsburgh Theological Seminary from 1981-2011, when the Seminary awarded him faculty emeritus status. In 2013, PTS established The Rev. George E. Tutwiler Scholarship Endowment to honor his 30 years of service here.

George received his bachelor’s in music and English from Geneva College, where he became a lecturer in music. He earned a certificate in theological studies from Wesley Theological Seminary and took graduate studies at Union (N.Y.) Theological Seminary School of Sacred Music and the University of Pittsburgh.

Widely known as a recitalist, conductor, clinician, and lecturer, he was dean of the American Guild of Organists’ Pittsburgh Chapter and served as the Guild’s councilor for Mid-Atlantic States for eight years. He also served a six-year term as national director of the Committee on Seminary and Denominational Relations and a vice president of the Pittsburgh Concert Society.

An ordained elder in The United Methodist Church, for nearly 40 years he served as an associate pastor/minister of music at three Pittsburgh area churches: First UMC of Pittsburgh, Eastminster Presbyterian Church, and Coraopolis UMC. He also served interim appointments, including Trinity Cathedral and First Presbyterian Church in Pittsburgh. Following retirement, he resided at Canterbury Place, where he served as volunteer organist for Protestant worship services.

A member of the World Methodist Council, Hymn Society in the United States and Canada, and the Fellowship of United Methodists in Music and Worship Arts, his interests focused on global congregational song and the renewal of liturgy and music in the church.

A memorial service will be held at a later time. Dalessandro Funeral Home in Pittsburgh is handling arrangements.