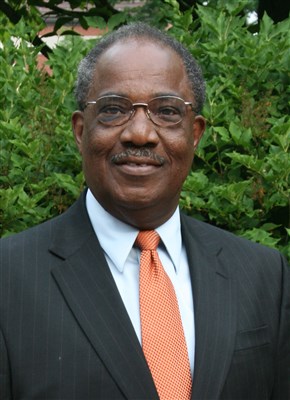 On Wednesday, November 27, 2019, the Rev. Dr. Paul D. Taylor, who retired in 2018 as Pittsburgh District Superintendent, moved to eternity's silent chamber. His heart remained at the little house by the side of the road in Fairmont, WVa where he was born March 25, 1949, the oldest of four children of the late Arthur James and Catherine Dooley Taylor.

Paul graduated in 1971 from Fairmont State University with a bachelor of arts degree and in 1974 he earned a doctor of jurisprudence degree from West Virginia University College of Law.  He earned a master of divinity degree in 2006 from the Pittsburgh Theological Seminary and was commissioned a provisional elder in the Western Pennsylvania Annual Conference of The United Methodist Church in 2006 and was ordained an elder in 2009.

On August 4, 1973, Paul was united in marriage to his beloved wife, Loretta Jefferson Taylor. From this union, they were blessed with twin daughter and son Christine D. Taylor and Paul D. Taylor II.

Paul had a 27-year secular career as a corporate attorney, starting in 1974 as a staff attorney for Consolidated Natural Gas Transmission Company in Clarksburg, W.Va.  He was deputy general Counsel-Employment, Labor and Employee Benefits at the time of his retirement in 2001 from Consolidated Natural Gas Company (Dominion Energy). Paul also served as an adjunct professor at Fairmont State University for 14 years.

With the support and encouragement of others, Paul enjoyed a vocational calling as an ordained elder in The United Methodist Church and had the sacred opportunity to serve as Pittsburgh District superintendent of the Western Pennsylvania Annual Conference. Previously, Paul was blessed to serve as senior pastor at Bethel (Lower Burrell) United Methodist Church (2008-2014), where he experienced God's story of love, grace and community that created a "thin place" as heaven and earth came together as one. During his service as associate pastor at Garden City United Methodist Church (2006 and 2008), Paul learned the transforming power of disciple formation.

Paul was forever grateful for Calvary (McKeesport) United Methodist Church (2001-2008), which received him on faith as pastor with no training or experience and walked alongside him to develop and nurture him as a God-centered pastor. Grace alone!

Beneath Paul's credentials, vocational calling and career was one who loved and treasured family and desired to be a friend to all. Paul's treasured memories are his children's piano and vocal recitals, violin concerts, soccer and Little League games, rain-soaked camp outings, museum and field trips with nephews and nieces, beach and historic site vacations with extended family, Thanksgiving, Christmas and family holiday gatherings. His soul's desire was to "live in a house by the side of the road where the race of humanity goes by – some good, some bad, some are weak, some strong, some wise, some foolish – but so am I. And be a friend to all [humanity]."

In addition to Paul's parents and wife, he was preceded in death by his brother, Frederick D. Taylor; mother- and father-in-law William and Kathryn Jefferson; three sisters-in-law and a brother-in-law; nine paternal and maternal aunts; and three maternal uncles.

Friends and family will be received from 3 to 8 p.m. Friday in Greenlee Funeral Home, 619 Main Street, Bentleyville. An additional viewing will be held from 10 to 11 a.m., the hour of services, Saturday, December 7, in Grace United Methodist Church, Coal Center. Interment will follow in Beallsville Cemetery.

In lieu of flowers, make donations to American Lung Association, UM Foundation of Western Pennsylvania, Home of Hope in Nyadire, Zimbabwe, or WPA Annual Conference of the UMC's Camping Initiative.

A guest book and personal condolences may be accessed at www.GreenleeFuneralHome.com.