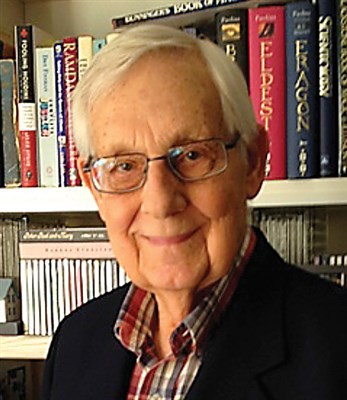 The Rev. Donald E. Struchen’s life of service to Christ took him around the U.S. and around the world.
Along the way, the United Methodist pastor made time for the occasional adventure and a bit of magic.

Struchen, 97, died June 28 at his home in New York City, with his wife Shirley by his side.

A year earlier, the United Methodist Western Pennsylvania Conference had recognized his status as the conference’s oldest member with the most years of service by presenting him with the “Thoburn Cane.” The replica cane is similar to one carried by Bishop James M. Thoburn, a graduate of Allegheny College and a missionary Bishop for India and Malaysia.

Struchen accepted the cane with characteristic humor. “I never thought I’d make it,” he joked when he took the podium, “and, boy, am I tired.”

But he also turned serious, referring to tensions within the denomination, as he continued to speak. “I can’t do much more anymore,” he said, “but I can pray, and I’m praying that we continue to be The United Methodist Church, loving one another and loving the world.”

Struchen was born in Erie, PA, January 18, 1923. After high school he attended Cornell College in Mt Vernon, Iowa.  Licensed to preach in 1941, Struchen was ordained a deacon in 1946. That summer — while a student at Garrett-Evangelical Seminary in Evanston, Ill. — he and a fellow student decided to  become post World War II “cowboys” on a ship headed to Trieste, Italy, with 900 horses for local farmers.

His recollections of the seafaring adventure for The Heifer Project’s Cowboy Chronicle had elements of romance, suspense and introspection. Most of all, it was fun. “It was a great adventure and wonderful summer even though I was bitten in the arm by one of the horses,” Struchen wrote.( See excerpt from World Ark magazine)

After graduating from Garrett, Struchen was ordained an elder in 1948 in the Methodist Erie Conference, which later became the Western Pennsylvania Conference. The Donald E. Struchen Endowed Scholarship was started at Garrett Evangelical Theological Seminary in 2014.

He served the Cochranton and Mumford Chapel  churches and in 1953 began serving as executive secretary of the Conference Education Board.  In 1961, he joined the Methodist Board of Missions in New York — later the United Methodist Board of Global Ministries — where he served as a staff executive until retirement in 1988.

He served on the Board of Trustees of the United Methodist House at Chautauqua Institution, Chautauqua, NY.
Long after retirement, Struchen continued to serve in mission in many different ways, particularly as a member of the Church of St. Paul and St. Andrew in Manhattan. He was an active volunteer with the West Side Campaign Against Hunger (WSCAH), a food pantry nonprofit originally started by church members that is still located in the church building.

There will be a memorial service with Church of St Paul & St Andrew on Zoom, August 5 at 6:30 pm.

Gift can be made to: The Donald E. Struchen Endowed Scholarship at Garrett Evangelical Theological Seminary; WSCAH- West Side Campaign Against Hunger; or Church of St Paul and St Andrew.