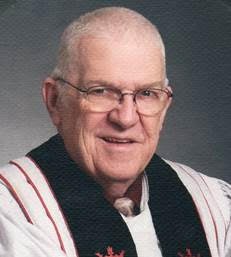 Pastor W. Craig Smith, 79, who was passionate about his ministry at the Mt. Jewett and Hazel Hurst UMCs and reached many others through his Light on the Hill radio show, died Monday, February 12, 2018 at St. Vincent Hospital in Erie following a brief illness.

Born June 25, 1938 at his family farm in Limestone Twp., he was a son of the late William and Margaret McLaughlin Smith.  On September 22, 1988, at Kingsville United Methodist Church, he married Roberta "Bobi" Schrubb, who survives.

Before being called to the Methodist ministry, he worked on the LEF&C Railroad for many years.  He completed the Course of Study through the Wesley Theological Seminary in Washington, DC; graduating in 1998. Pastor Smith served the Sherrett/Wattersonville/Kaylor/Queenstown churches from 1993-2000, then moved to the Mt. Jewett/Hazel Hurst Charge, where he served as a Local Pastor until his death.

His radio show aired Sunday mornings on the Hound Radio Station, where he also did sporting events. Earlier in life he had been a square dance caller and had been active as an umpire in Little League.

Along with his parents, he was preceded in death by two sons, Craig W. Smith and Martin Scott Smith, and his stepfather Harry Love.

Friends will be received Friday, February 16, 2018 from 4 to 8 pm at the Cummings Funeral Home Inc, 155 Greeves St., Kane, PA.  There will be an additional visitation on Saturday, February 17, 2018 from 11am to 1pm at the First United Methodist Church, 112 Greeves St., Kane, PA.  Funeral services will follow at the church at 1 pm with The Rev. Pat Lenox, Kane District superintendent, officiating.  Interment will be in Bridgeview Cemetery.

In lieu of flowers, memorial donations may be made to either of his churches, Mt. Jewett or Hazel Hurst United Methodist Church.

Online condolences can be expressed at www.cummingsfh.com.