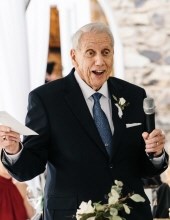 Rev. Roger R. Shaffer, Sr. died on August 4, 2021 in Charlotte, NC. Rev. Shaffer was born on October 4, 1933 in Sandy Lake, PA to the late Harold W. Shaffer and Ruth Lydick Shaffer. He married Sally Jean Popa in June, 1955. He graduated from Grove City College, PA and Western Theological Seminary in Pittsburgh, PA. Rev. Shaffer was a member of the Western PA Conference of the United Methodist Church. He retired from active ministry Western PA in 1995 and was a member of Forest Hill Church in Charlotte, NC.

Roger was totally devoted to his Sally, children, and grandchildren whom he loved, supported and placed first in his life. Roger is survived by his beloved, Sally; his children: Roger Ray Shaffer, Jr., and wife, Kelly, of Hermitage, PA; Jeffrey Curtis Shaffer and wife, Cindy, of Hermitage, PA; and Lisa Jean Allen and her husband, William, of Charlotte, NC; two grandchildren, Kelsey Nicole Kasperson and her husband, Justin, of Charlotte, NC, and Connor William Allen of Charlotte, NC; and his brother-in-law, Sam Sneeder, of Mechanicsburg, PA. In addition to his parents, two brothers, Richard K. Shaffer and Jack H. Shaffer predeceased Roger.

Roger, a man of prayer, used every opportunity to witness to his family and others about the Lordship of his Savior, Jesus Christ, prompted by his favorite scripture, John 14:6. For 42 years in the United Methodist Ministry, he loved the people he served and was loved in return. In later years, he would come up with a hymn or song for every occasion or topic of conversation.