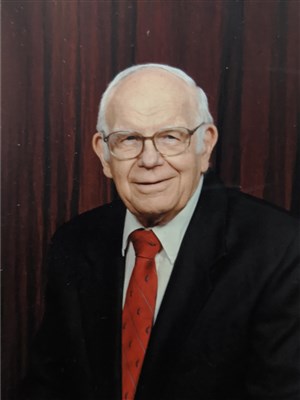 Rev. Paul H. Scruton of Johnstown passed away on March 8, 2020 at Arbutus Park Manor. He was a pastor for many years in Maine, New Hampshire, New York and Pennsylvania, where he began serving the Jennerstown Circuit of the Evangelical United Brethren Church in 1966, a few years before the merger that formed the United Methodist Church.

Born June 9, 1922 in Berwick, Maine, the son of John Y. and Esther (Dow) Scruton, he was preceded in death by his parents, wife Marjorie Ellen "Marge" (Durgin), brother Raymond and sister Marjorie St. Pierre.
He is survived by his children: the Rt. Rev. Gordon Paul, married to Rebecca (Polley) of Connecticut; Carol Jean married to Gary Griffith of North Carolina; Lois Elaine Mock of Mundys Corner, and Wayne Morris married to Melanie (Bracey) of Virginia. Other survivors in sister Carolyn Ryder of Florida; nine grandchildren and 10 great-grandchildren.

Rev. Scruton served the Jennerstown Circuit, which included Jennerstown, Bethany and St. John's UMCs, until 1977, when he was appointed to Johnstown: Trinity UMC. He moved to Nanty Glo UMC in January 1979 and retired in 1984. In retirement, he served as a chaplain at Arbutus Park Manor from 1984-2000.

Rev. Scruton was a member of Belmont United Methodist Church and the Western PA Minister's Chorus. He was also a life member of Jenner Twp. Fire Dept., where he was the past president for a number of years.

Friends will be received from 2-4 and 6-8 on Friday at Henderson Funeral Home, East Hills, 2503 Bedford St.  A memorial service will be held at 10 a.m., on Saturday at Arbutus Park Manor Chapel, with the Rev. Dr. David Stains and Rev. Jean Smith officiating. Interment at Jenner Crossroads Cemetery.