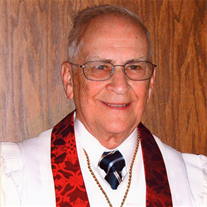 On Sunday, May 7 at 2:33 a.m., the Reverend John Sass, Jr. entered the Church Triumphant while holding the hand of his youngest granddaughter Danielle, who faithfully kept watch over him during his last days.

On August 13, 1943, at the age of 17, he joined the US Navy and served until March 24, 1946, on the heavy cruiser, the USS Quincy. He was at the Battle of Normandy and served in both the European-African theater and Pacific fronts for 31 months.

He also survived the typhoon off the coast of Okinawa when the USS Pittsburgh lost her bow. While serving on the USS Quincy, he spoke with General Eisenhower and was onboard to take President Roosevelt to and from the Yalta Conference. He was in the Pacific on VE Day and in Tokyo Bay on VJ Day.

On August 9, 1947, he married Mildred Jenette Bittner, “the love of his life,” who predeceased him on April 19 of last year. They were married by his wife’s uncle, Rev. E.I. Mankamyer, at his grandmother’s house in Potomac Park, Cumberland, MD.

He graduated from Asbury College in Wilmore, KY, with a B.A. Degree in 1954 and from United Theological Seminary, Dayton, OH, with a Master of Divinity in 1959. He was ordained in the First Evangelical United Brethren Church in Johnstown, PA, in June 1959 by Bishop Howard.

While in college, he served three years as pastor at the Nicholasville City Mission and his last year at American Avenue Church in Lexington, KY. He was then assigned to the five churches in the Cherry Tree Charge near Indiana, PA, from 1954-1956, the Brown County Parish from 1956-1957, and Castine-Yankeetown Charge from 1957-1959, both of which were in the Ohio Miami Conference.

In 1959, he was assigned to serve the Salix and Elton Evangelical United Brethren churches in the Johnstown District and was there for 16 years. While there, he oversaw the building of a new parsonage at Salix; a new parsonage, an educational unit, and the rebuilding of the sanctuary after sustaining an arson fire at the Elton Charge.

In 1975, he was assigned to the Christ United Methodist Church in Franklin, PA, where he served for 17 years. During his ministry there, he oversaw the rebuilding of the church due to a fire and the purchase of a new parsonage. Also during this time the worship service began being broadcast on local television, which continues today.

On June 20, 2004, he was installed as Pastor Emeritus of Christ United Methodist Church in Franklin.

While at the Salix-Elton Charge, he served as president of the ministerium, secretary of the Committee on Evangelism, was a member of the Commission on Equitable Salaries, a counselor at Camp Allegheny, a member of the Johnstown Lions Club, serving as both president and secretary. While at Christ United Methodist Church, he sat on the Board of Venango Video, the Personal Care Home Provision Board of Venango County, Northwest Medical Center’s Institutional Review Board, Venango County AAA Advisory Council, and Area Agency on Aging Board. He also held Conference positions on the Board of Equitable Salaries and Board of Pensions.

Rev. Sass enjoyed photography, golfing, and in later years, exercising and swimming at the Franklin YMCA. But most of all he enjoyed traveling with his wife of 68 years and spending time with his children, grandchildren, and great-grandchildren.

Full military honors will be rendered by the V.E.T.S. Honor Guard at the church following the funeral service. Interment will follow at Franklin Cemetery.

Memorial contributions may be made to Christ United Methodist Church 1135 Buffalo St. Franklin, PA 16323.
Online condolences may be sent to the family by visiting www.HuffFuneral.com.