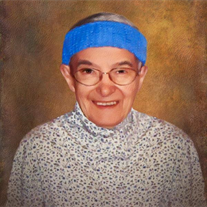 Sara Mae Beveridge, 92, the surviving spouse of the late Rev. Harry William Beveridge, died at 12:20 p.m. June 14 at her home in Butler.

Born Oct. 28, 1923, in Hill City, she was a daughter of the late Joseph and Luella Rhoades Hecathorn. Sara was a graduate of Cranberry High School, and earned a bachelor's degree in education at Clarion College, now Clarion University. She was a member of the Butler First United Methodist Church.

Sara was a homemaker. She and her husband enjoyed traveling all over after retirement. She also loved to bake, read and play games.
On Nov. 4, 1944, she married Harry William Beveridge, who preceded her in death.

In addition to her parents and husband, she was preceded in death by her brother, Alvin Hecathorn.

Funeral services were on Saturday, June 18 at the Morrison Funeral Home in Oil City, with Rev. Brock Beveridge officiating. Interment was in Heckathorn Cemetery.