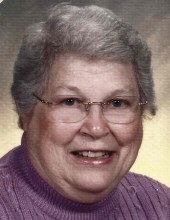 June was a member of the East Grove United Methodist Church where she was active in the "Half Baked Bakers" and helped with the Children's "FROG" program. She also enjoyed gardening, vegetables, flowers, sewing, traveling and visiting with family.

She was preceded in death by her parents, husband, two brothers, Charles L Dittman, Jr. and Robert G. Dittman; and a sister Elizabeth Johnston.

Funeral services were scheduled for Wednesday, August 17 at the Gardinier Funeral Home in Franklin, PA, with the Rev. Drew Bell officiating and the Rev. Lea Guiney co-officiating. Interment will be made in the Graham Cemetery.

Memorial contributions may be made to the East Grove United Methodist Church, 1167 Belmar Road, Franklin, PA 16323.

To send flowers, cards, online condolences or for further information, family and friends are invited to visit www.gardinierfuneralhome.com.