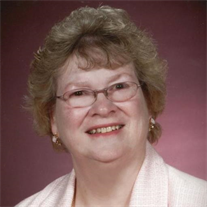 Marlene H. Richards, 73, of Franklin, an educator and the widow of the Rev. Donald D. Richards, passed away Monday December 26, 2016 at Wesbury in Meadville, with her daughter at her side.

Born in Pittsburgh on September 23, 1943, she was a daughter of the late Clyde J. and Blanche E. Keller Hecht.

On June 3, 1967 she married Rev. Donald D. Richards, and he preceded her in death on December 29, 1994. Marlene’s life work in education was in conjunction with her husband’s ministry throughout western Pennsylvania.

Marlene worked to establish a preschool at Lakewood United Methodist Church in Erie which still operates today. She taught kindergarten and second grade at Baldwin-Whitehall School District until she became a mother in 1980, then took a hiatus to raise her children until they were school age.

Marlene was a substitute teacher at the Johnsonburg Area School District and also director of The Learning Center in Elk County. When arriving in Franklin, she became a substitute teacher for Venango County Schools and Intermediate Unit 6 until becoming the first Executive Director of Grace Learning Center in Franklin where she worked tirelessly to build the program until her retirement in 2005.

Marlene had a true gift and passion for working with children and was always able to bring out the best in them. She considered Franklin to be her home, and she treasured her Franklin family.

Marlene had a true servant’s heart and volunteered for many organizations in Franklin including Meals on Wheels and the Salvation Army. She was a former member of the Franklin Civic Operetta Association Board and head costume mistress at the Barrow – Civic Theater where she also produced and acted in numerous productions.

She was a faithful member of First United Methodist Church in Franklin where she sang in the choir and directed the bell choir. In all the churches that Marlene and her late husband served, she was actively involved in children’s ministry and music.

Surviving is a son, Andrew Richards and his wife Alicia Assetto of Eldersburg, MD; a daughter, Sallie Richards and her husband Jonathan Bartram of Franklin; two grandchildren, Benjamin Richards and Genevieve Richards, who were her pride and joy; a sister, Janice Hecht Murray and her husband Robert; a sister-in- law, Joann Hecht; a brother- in- law, James B. Richards, III and his wife Liz; an aunt, Jean Kinnan and an uncle, Paul Hecht and several nieces, nephews, and cousins.

In addition to her parents and husband, she was preceded in death by her brother, Jack Hecht.

Additional visitation will be held from 9:30 – 10:45 A.M. Friday at First United Methodist Church 1102 Liberty St. Franklin where funeral services will be held at 11:00 A.M. with Rev. Jeff Little, Pastor of the Church, officiating.

Marlene’s family wishes to express sincere appreciation to the staff at Wesbury and Hospice for their care and support of her and the family.

Online condolences may be sent to the family by visiting www.HuffFuneral.com.