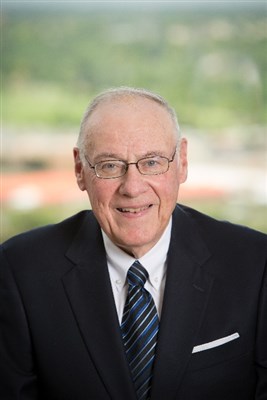 Jay S. Pifer, 84, of Aiken, South Carolina passed away on January 16, 2022 surrounded by his loving family.  He continued to demonstrate selfless concern for others even while battling glioblastoma and pancreatic cancer.

He was born on August 11, 1937 in Ridgway, Pennsylvania, the son of Vance and Hazel Pifer.  A graduate of Penn State University and Clarion State University, Jay completed the Ministerial Course of Study at Wesley Seminary and was ordained a deacon in the Western Pennsylvania Conference of the United Methodist Church.

Jay was former President of Allegheny Power and President of its subsidiaries – West Penn Power, Monongahela Power, and Potomac Edison -- and retired after 42 years of service. He also served 36 years as a pastor at various United Methodist churches and retired from the Western Pennsylvania Annual Conference.

Jay was on the Board of Directors of the Energy Corporation of America, headquartered in Denver, Colorado.  He was active in a number of business and community organizations and served as President of the Boy Scouts of America Westmoreland-Fayette Council, and was recipient of the Silver Beaver Award.  He served as a trustee of Waynesburg University (Pennsylvania) and was on the boards of the University of Pittsburgh - Greensburg and the University of South Carolina - Aiken.  Jay received Penn State University’s Outstanding Engineering Alumni Award and Penn State’s Alumni Fellow Award.  He was recognized during a session of the U. S. House of Representatives for his corporate and community leadership.

A Memorial Service/Celebration of Life ceremony will be held at a future date.

In lieu of flowers, a donation may be made to the Jay and Betty Pifer Scholarship Fund at Jumonville Camp (800-743-2128), a Christian mountaintop retreat in southwestern Pennsylvania that ministers to hundreds of youth each summer.