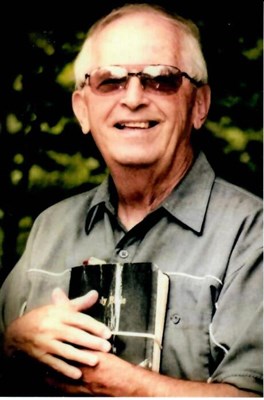 Rev. James B. Patterson, 79, of Entriken, PA passed away November 17, 2020 at Conemaugh Memorial Hospital in Johnstown from Covid 19 complications.  Born on May 12, 1941 in Wilkinsburg,  to the late James and Freda Elizabeth (Freise) Patterson of Monroeville, he was united in marriage to Bonnie Gaye (Lockhart) July 8, 1967.

Jim graduated from Turtle Creek High School in 1959, Catawba College in North Carolina in 1964 then Wesley Theological Seminary in 1968.

As a clergy member of the Western Pa. Conference of the United Methodist Church, he served First United Methodist Church in Windber from 1966-1970, Asbury UMC in Waterford near Erie from 1970-1978 when for two of those years he also served Mill Village UMC. Jim was appointed to Community UM Church in Harrison City in 1978 and served there for 13 years.

Jim served on the Board of Directors of Wesley Woods camp for eight years, six of them as President. He also was the Conference representative to Pa. Council of Churches and member of the Conference camping committee.  In his community, Jim was appointed by Westmoreland County's Juvenile Court judge to serve on the Penn Township Juvenile Justice Commission for 10 years.

For 21 years, Jim served as Dean of Water Ski Camp and starting in Waterford, for 20 years he took youth on yearly trips to Washington, D. C.  and later added New York and Nashville on a 3-year rotation.

Jim was appointed to Lakewood UMC in Erie in 1991 and served there for 13 years. Again he also cared for the youth of the community as Chairman of the Millcreek Township Youth Commission for 10 years. He also was on the Mother to Mother Advisory Board for Erie County. During those years he served on the Conference Board of Trustees for six years and the Wesbury Board of Directors for 8 years. The also was named to the Asbury Woods Advisory Board, where he served five years.

Jim had a dream come true when he was invited to be Chaplain of the U.S. House of Representatives to open the daily session with prayer.  This is now recorded in the Congressional Record.  After retiring, he continued preaching wherever needed.

In 2007 he was asked to minister part-time for three United Church of Christ congregations, St. Paul’s, St. Matthews, and Zion for 5 ½ years.  He also taught stained glass in the Senior Center and taught AARP 55-Alive Safe Driving Classes for 10 years.   He loved visiting in hospitals and nursing homes.  He felt if you loved people, they would love you back -- and they did.

Memorials can be sent to the churches he served or the food banks in those areas.