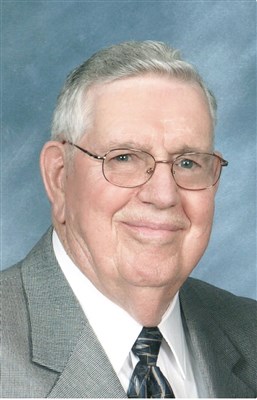 Rev. Jackson Harold Parsons, Sr., 95, was born in Cherry Creek, NY on August 23, 1922 and went to be with his Lord and Savior on Wednesday May 23, 2018. He was the son of the late Harold B. Parsons and Edith Abbey Parsons and the second oldest of 14 children.

Jackson graduated from Cherry Creek High School in 1940, and after training in welding, worked for the American Locomotive Company in Dunkirk, NY through the fall of 1942. Then with World War II in progress, he enlisted in the Army Air Corps on October 14, 1942. After training, he served as a propeller specialist on B26 and B25 bomber aircraft that were being prepared for pilot training in Kansas and Oklahoma.

While on furlough, Jackson married his sweetheart, Iola A. Chapman, on October 22, 1943 in their home church in Cherry Creek, NY. After discharge from the Air Force, he felt called to the ministry in the Methodist Church. He graduated from Houghton College in 1951 with an A.B. Degree and in 1956 with a Master of Divinity degree from Christian Theological Seminary.

While in seminary he served in churches in Indiana and Illinois, and was ordained a Deacon, courtesy of the Methodist Illinois Annual Conference. Bishop Wicke ordained him as Elder in the Western PA Annual Conference in June 1956.

He served churches in the Western PA Conference of the United Methodist Church in Sheffield and Barnes, Epworth Church in New Castle, Trinity Church in Erie, Grace Church in Oil City, and Evangelical Church in Corry. He retired in 1986 and then served Lake Pleasant, Union City and Emmanuel Church, North East until 2000.

Rev. Parsons served on various district committees and enjoyed playing golf and bowled until well into his 80's.

Friends may call at the Russell C. Schmidt & Son Funeral Home Inc., 5000 Wattsburg Rd., on Wednesday from 4 to 7 p.m. and on Thursday morning at Wattsburg United Methodist Church, 9904 Jamestown Rd., Wattsburg, 16442 from 9 a.m. until the time of services there at 10:00 a.m.. Burial will follow in Wattsburg Cemetery