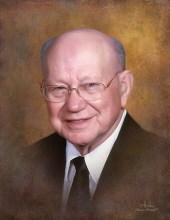 Rev. Donald E. Myers, 92, of Seneca, went home to be with the Lord, and was reunited with his wife, surrounded by family, on Wednesday, December 18, 2019, at Oakwood Heights in Oil City. He retired as a local pastor in 1990.

Born October 20, 1927, in Oil City, he was a son of the late Harold E. and Florence Grisby Myers.
In January of 1946, Donald began his service in the U.S. Army. He was a cook, stationed in Vienna, Austria, cooking for over 200 men daily. Don was honorably discharged from the Army in June of 1947 with the ranking of a Corporal.

Don worked as a laborer at J & L Steel for many years. Don and his wife, Doris, owned the only Montgomery Ward Catalog Store in Seneca from 1971 to 1977. After the store closed, Don went on to attend Wesley Theological Seminary in Washington D.C. and went into the ministry full time in the early 80s. He retired from active ministry in 1990 after serving the following churches: Cherry Tree/Burnside/Emeigh/Susquehanna 1980-1981; Valley Charge: Cherry Tree/Wallaceville 1981-1983, and Franklin: Nicklin/Polk: Center 1983-1990.

Donald was a member of the Seneca United Methodist Church since the 1960s.

Also surviving is a brother Lewis Myers of Franklin, and a sister-in-law, Shirley Hetzler of Lima, OH.

In addition to his parents, and his wife Doris, Donald is preceded in death by three brothers, John Myers, Harry Myers, and an infant brother, Dickie Myers; one sister, Ada Myers; three sisters-in-law; and two brothers-in-law.

Interment will be in Rockland Cemetery.