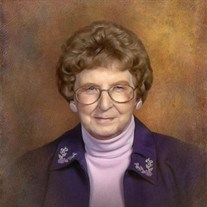 Born August 2, 1929 in Rockland, she was a daughter of the late Joseph and S. Irene Martz Hetzler. Doris loved baking, her artwork, and was an avid seamstress.

Doris and her husband Donald E. Myers owned the only Montgomery Ward Catalog Store in Seneca from 1971 to 1977. After the store closed, Mrs. Myers worked and supported her husband as he pastored four Methodist churches in Cherrytree, Wallaceville, Nicklin, and Center for over 20 years.

She was a member of the Seneca United Methodist Church since the 1960s.

On March 23, 1946, she married Donald E. Myers, who survives. They celebrated 71 years of marriage together last year.

Also surviving are a brother and sister-in-law, Lewis and Audrey Myers of Franklin, and a sister-in-law Shirley Hetzler of Ohio.

In addition to her parents, she was preceded in death by two brothers, Joseph Hetzler, and Fred Hetzler.

Friends may call at the Morrison Funeral Home on Monday, February 19th from 2 to 4 pm and 7 to 9 pm. With additional visitation on Tuesday from 10 to 11 am. Funeral services will follow at 11 am with the Rev. Bill Hastings, pastor of the Seneca United Methodist Church officiating.

Interment will be in Rockland Cemetery.

The family would like to extend a special thanks to the staff at Oakwood Heights for their compassionate care, especially the staff on the second floor.