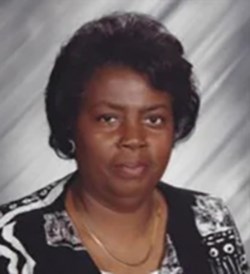 At 11:55 pm on April 6, 2022,  Joan Simms Moore, Bishop Cynthia Moore-Koikoi’s mother, transitioned from this life to the next. Friends and family will gather to celebrate her life on Wednesday, April 13, 2022 at Calvary United Methodist Church, 400 S Main Street, Mt. Airy, MD 21771. The Family Hour will begin at 10 a.m. followed by a Celebration of Life  service at 11 a.m. The service will be live-streamed on the church Facebook page facebook.com/CalvaryMtAiry/ . Mrs. Moore's obituary follows.

In the final hour of April 6, 2022, Joan Lee Simms Moore transitioned from this life to the next. She was preceded in death by her parents; siblings Liz, James, Charles, Rose, Lucille, Doris, John, Jr., Irene, and Randolph; and her beloved husband of 56 years, Rev. Maurice S. W. Moore. Born on May 29, 1940, Joan was the thirteenth of thirteen children born to John Wesley Simms, Sr., and Mary Beatrice Myers Simms.

Joan grew up in the family home in Mount Airy, Maryland. Joan was very quiet as a child and always did well in school. She attended Robert Moton High School in Westminster, Maryland where she played on the women’s basketball team. After graduating from high school, she attended Morgan State College, now Morgan State University. She was the first of her siblings to attend college. While at Morgan, Joan played on the women’s basketball team and became a member of Alpha Kappa Alpha Sorority, Incorporated. She graduated from Morgan in 1962 with a bachelor’s degree in Business Administration.

On November 20, 1962, Joan wed the love of her life, Rev. Maurice Sumner Whiting Moore, at Mount Zion United Methodist church in Mount Airy, Maryland. The first year of their marriage Joan lived with her in-laws and Maurice commuted back and forth from the charge he pastored in Villa Rica, Georgia. Joan was much beloved by all of her in-laws, and she loved them dearly, too.

She found it wonderful, yet at times very interesting, to live with her many younger sisters and brothers in-law.  They were accustomed to much more activity and noise than Joan was. Exasperated one day, when the boisterous youngsters were all gathered in one bedroom, Joan quietly locked the youngsters in that bedroom so that she could have some peace.

Joan was a supportive, faithful ministry partner for Maurice. As an introvert she often worked behind the scenes in the churches to which Maurice was appointed. She participated in the United Methodist Women, choir, bible study, and adult Sunday school at each of Maurice’s appointments. She could often be found in the kitchen helping with church dinners or hosting a church meeting in the parsonage.

Joan devoted herself to her family and the raising of her children Cheryl, Cynthia, Kyle, and Ronald. She believed that caring for her family was her primary vocation. She did, however, work occasionally for the Harford County Public School System as a home teacher, providing education for students who could not attend school because of their fragile health conditions. Later when her youngest was in middle school, she worked for the Frederick County Public School System helping students be more successful.

Joan was a very creative and resourceful person.  She excelled in needle crafts including knitting, crocheting, and sewing. She often made items for her family including quilts for each of her children when they went to college and her grandson soon after his birth. She handmade Christmas ornaments and was known for colorizing Christmas angels and other images so that they reflected African American skin tones.

Joan was a DIY guru before DIY was a thing. On several occasions Joan would see merchandise in a store and declare, “They are asking too much for that. I can make that myself.”  And she would make it, only better. She graciously tried to teach others to make a wide variety of crafts. Often she taught the United Methodist Women how to make crafts that they then sold to raise money for missions.

Joan was also known for her homemade culinary delights. She made sure her children had a hot meal each morning before leaving for school. Irrespective of school activities or evening church meetings, the family always sat down together to eat the dinner Joan had prepared. Her homemade rolls, lemon meringue pie, fried chicken, mixed greens, Watergate salad, sugar cookies, oatmeal raisins cookies, and ice cream were legendary. Friends and relatives would often stop by the parsonage unannounced on Sunday evenings just as dinner was being prepared. And Joan would always make sure there was more than enough food for all to enjoy.

Often the food she prepared came from her garden. Joan followed in her father’s footsteps in that way. She grew corn, collard greens (affectionately referred to as graveyard greens), kale, potatoes, onions, tomatoes, string beans, cabbage, cucumbers, watermelon, honeydew melon, and cantaloupe. Joan took her garden seriously. Once the family dog received a severe scolding after he grabbed a packet of cucumber seeds that Joan was planting and ran through the yard.

Joan cared for her immediate and extended family deeply. Whether they called her Aunt Sis or Aunt Joan, her nieces and nephews loved and respected her. She was a mixture of fire and grace as she made her expectations for behavior clear and did not allow anyone to get away with anything less.

Joan did not use a lot of words when making a point or providing discipline. At times she did not use any words at all, but you could always tell what she was thinking by her facial expressions or other body language. Her husband and children knew “the look.”

Joan and Maurice were devoted to one another in life and were always by each other’s side. Joan never got a driver’s license, so Maurice was her Uber driver who always got 5 stars.  Maurice’s heart broke when he was no longer able to care for his beloved Joan. And Joan longed to be with Maurice again after his death three and one-half years ago.

When Joan was diagnosed with cancer, she displayed her fire and grace once again. She decided what treatments she would and would not undergo. She concluded that she had lived a good life and was ready to be with her husband. She spent her last days on this earth being comforted by her children and listening to hymns and spirituals sung by Kathleen Battle and the Morgan State University Choir.

Funeral arrangements are being handled by March Funeral Home West: 4300 Wabash Avenue, Baltimore, MD 21215
Memorial donations may be made to The Farm Alliance of Baltimore  or the Community Foundation of Frederick County