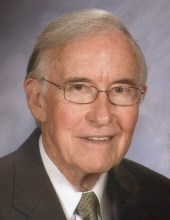 Gail E. McQueen was born on April 25, 1927 to Thomas and Mary Lavina (Burnell) McQueen in Hollidays Cove, WV. As a result of the Great Depression, the family moved to Canton, OH, and ultimately moved to a small farm near Magnolia, OH. Gail graduated from the Magnolia High School in 1945 and was subsequently drafted into the US Army, completing basic training in Florida. He arrived in Bremerhaven, Germany on Christmas Eve 1945. He then traveled by troop train to a base near Furth, where he guarded supply trains and SS prisoners of war. It was in Germany that he answered God's call to full time ministry.

After his honorable discharge he enrolled as a student at Asbury College, graduating in 1951. He graduated in 1955 with a Master of Divinity degree from Pittsburgh Xenia Theological Seminary, now Pittsburgh Theological Seminary. During seminary he pastored churches in rural Ohio and was ordained in the Northeast Ohio Conference of the Methodist Church, then transferred in 1960 to the Pittsburgh Conference (now the Western PA Annual Conference of the United Methodist Church), serving churches in McKeesport, Homer City, Unionville, Wattsburg, Point Marion, Oil City and Johnstown. In retirement he served two interim pastorates in New Wilmington and New Castle: Epworth UMC.

For 17 years in retirement he served on the staff of the Harmony-Zelienople UMC as Minister of Pastoral Care. He enjoyed family gatherings at the farm and growing and tending a very large vegetable garden. His life was devoted to the Lord Jesus Christ, the ministry and his family. He was gifted with preaching and music ministry.

He was preceded in death by his parents, his sister Virginia (Rev. Paul) Clark, his first wife, Iris Elaine West McQueen and an infant daughter. He and Iris were married in Amsterdam, Ohio on September 8, 1950 and she preceded him in death on June 21, 1980.

He is survived by a brother, Thomas (Nancy) McQueen and sister Shirley Hunter. He is survived by his wife, Judy Waltermire McQueen, whom he married on December 26, 1982. These children survive him: John and Linda Kingston McQueen, Faith McQueen, Rev. Jason and Beth Ikle McQueen, Thomas Scott McQueen, Susanna Henize and Melissa McQueen, Rev. Loren and Sara Lindsley McQueen and Sarah Gail and Brock Glasgo. Eleven grandchildren and four great-grandchildren survive and affectionately refer to him as "Papa". Judy's large sibling group of four brothers and five sisters along with their families also survive.

There will be no public viewing. The family will greet friends at the Harmony- Zelienople UMC, 123 N. Pittsburgh St., Zelienople, PA 16063, on Saturday, February 29, 2020 from 9 AM until the time of service at 11a.m.  His sons Jason and Loren will conduct the service with Rev. Dan Owen, Rev. Eric Park and Rev. George Nagel. In lieu of flowers, you may make a donation to the Missions program of the HZUMC or to the Cherry Run Camp, in care of Don Shaffer, 4765 Ramsaytown Rd., Brookville, PA 15825.

Gail's choice was to be cremated with interment at a future date at the convenience of the family.

We, his family, are so blessed to be a part of his long life. His wisdom and passion for the Lord have blessed us greatly. His passing leaves a great void and yet we know that Jesus has welcomed him home.