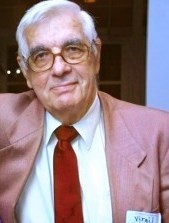 He was born to John Charles Maybray and Helen Peterson Maybray on February 10, 1919, in East Liverpool, OH. He graduated from New Castle (PA) Senior High School. He went on to earn degrees at Taylor University (BA), Wesley Theological Seminary (MDiv), and Temple University (STM), and did post-graduate studies at Hartford Theological Seminary.

After 30 years in the local church, he did mission work, first as the Executive Secretary of the Evangelical Missions Council of "Good News" and later as the founding Vice President of the Mission Society for United Methodists. His evangelistic and mission preaching took him to 100s of cities and towns throughout the United States and also to Great Britain, Mexico, and Paraguay. Always ready to preach, he would let anyone know that he had a sermon in his pocket.

He married his college sweetheart, Marian Ruth Young of Castlewood, PA, on July 6, 1944. Together, they enjoyed raising four children: Jon, Bonnie, Mark, and Tim. She died on May 10, 1989. God found favor with him a second time and allowed him to marry Jane (Green) Rodgers of Tequesta, Florida on January 2, 1993.

In addition to his wife, Jane, he is survived by three children: Jonathan and wife Joy Maybray of Springville, NY; Bonnie O'Neil and husband Ray of Fresno, CA; and Timothy and wife Lisa of Titusville, PA; a daughter-in-law Melanie Maybray of Drexel Hill, PA; and three step-children: Clay Rodgers of Jupiter, FL; Lisa Hockman and husband Mark of Prosperity, SC; Michelle Prendergast and husband Rob of Uniontown, OH.

His progeny also includes 33 grandchildren and 18 great-grandchildren. All of these he prayed for by name every day. In addition to his first wife, Marian, he was preceded in death by his son Mark Maybray and granddaughter Sarah Bronson.

A funeral service was held on Tuesday, November 10 at Trinity United Methodist Church, Palm Beach Gardens, FL, with the Rev. John Denmark presiding.  Burial was to be in Pennsylvania.

During the seasons of his life, he enjoyed baseball, fishing, golfing, reading, and traveling. He was an avid letter writer to family, supporters, bishops, and anyone to whom he wished to speak his mind. His signature was always, "He is Risen!"