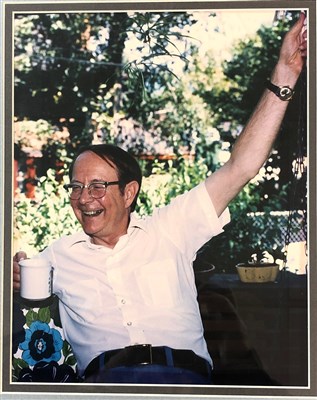 A devoted husband, father, grandfather, and great-grandfather, he served as a pastor in the Western PA United Methodist Conference for 15 years, retiring in 1999.

A graduate of Waynesburg College and the Course of Study at Wesley Theological Seminary, he earned a master of arts degree in theology and counseling from West Virginia University in 1971.

Jim began serving as a Supply Pastor on the Jollytown Circuit in 1952 and was admitted as a clergy member and deacon in 1963 and ordained an elder in 1965. He served the Brownfield and White Rock churches from 1962-65 and Dawson-Vanderbilt from 1965-70. He served a year as director of recreation and leisure ministries   at Laurel Highlands, then moved to serve at Brookline UMC in Pittsburgh, followed by Concerned of PA from 1973-76. He received honorable location status in 1981.

A veteran of the Army, Jim served as a private first class during World War II as a tank commander, driver, gunner, and cannoneer on a Sherman 34-ton tank in Company A, 28th Tank Battalion in the Asiatic Pacific Theater.

He was a member of Philip Cochran Memorial United Methodist Church in Dawson, a member of the Dawson Vanderbilt Lions Club, and was an avid reader.

Jim will be sadly missed by his loving family, his wife of 70 years, Mildred Jean "Millie" (Toplis) Martin; his children, Clifford Alan Martin and wife Karen of New York, Neil Emerson Martin and wife Sarah of Maryland; Kenneth Grant Martin and wife Debra of Maine, Aimee W. Twig and husband August of Greensburg, and Hattie C. Wolfe and husband Lester Leister of Rhode Island; 10 grandchildren; four great-grandchildren; his sister Joy Eggers, of Florida; and several nieces and nephews. In addition to his parents, he was preceded in death by a daughter, Paige Martin; and two brothers, Donald T. and Richard R. Martin.

Family and friends were received Saturday, Jan. 26 in the chapel of Ralph Galley Funeral Home in Dawson. Additional viewing was to be held from 12:30 to 1:30 p.m. Sunday in Philip Cochran Memorial United Methodist Church, where funeral services will scheduled for 1:30 p.m. Sunday with Pastor Rob Rabenstein officiating. Final resting place will be in Hoffman Cemetery. An additional memorial service will be announced at a later date.

Memorials may be made to Philip Cochran United Methodist Church. Love Lasts Forever!