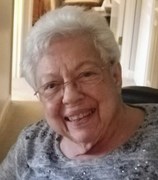 Mildred Jean "Midge" (Hess) Lutz of the Masonic Village of Sewickley, Pennsylvania, passed away peacefully at her residence on March 23, 2022. She was 92 years old.

Born in West View, Allegheny County, on Aug. 28, 1929, she was the daughter of the late Edward and Grace Hamburg.
Midge was a wonderful wife, mother, grandmother and a friend to many. She had been active in the Ingomar United Methodist Church in Franklin Park, where she formed and led a women's prayer group for over 30 years.

Preceding her in death, in addition to her parents, were her husband, John E. Hess Jr.; her son, Frank Mark Fisher III; her three brothers, Robert Hamburg, Bill Hamburg and Alec Hamburg; and one sister, Florence "Winkie" Peet.

Services will be private, and interment will be at the cemetery at Ingomar United Methodist Church, Ingomar, Pennsylvania.
Arrangements entrusted to Smith Funeral Home of New Wilmington, Pennsylvania.