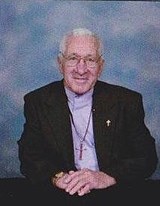 Rev. Ralph G. Landis, Jr., 94, of Berlin, a retired associate member of the Western PA Conference and a former missionary, returned to the Lord on Oct. 5, 2017 at Meadow View Nursing Center.

He is survived by sisters Ruth Kammer of Florid, and Geraldine (Guy) Raupach of Glencoe; sister-in-law Mary (McQuade) Landis, and a host of nieces and nephews.

He was a 1941 graduate of Berlin Brothersvalley High School, a 1942 graduate of Thompson Business School in York, and a 1970 graduate of Lee’s Junior College, Jackson, KY. Ralph worked with Westinghouse Electric in general accounting, manufacturing and tax accounting from 1942 to 1963. From 1963 to 1965 he worked at Riverside Christian School in Lost Creek, KY, as a farm manager, superintendent of building and grounds, work supervisor, and assistant business manager.

He established Gospel Light Mission in Watts, KY in 1965 and served as the pastor, youth leader and Sunday school teacher until 1971. He also looked after the physical needs of people by taking them to doctors, hospitals, and grocery stores.

During his time at Gospel Light Mission he began his ministry studies under the United Methodist Church, and in 1969 was ordained as a Deacon. In 1971 Ralph traveled to Hazard, KY as a community developer under the Board of Missions of New York and Kentucky. This involved ministry with senior citizens, state park services, those with disabilities, day care, a TV program, and a youth in two churches.

Ralph returned to Berlin in 1986 and served as Chaplain and Director of Clergy Services at Maple Mountain Manor Nursing Home until 1991. From 1991 to 1994 he served with the Salvation Army in Somerset.

In 1989 he published his autobiography entitled “Go Ye Therefore”.

Pastor Ralph filled in at 25 churches in Somerset and Bedford Counties from 1986 to 1998 for pastors absent or on vacation. He preached regularly at Roxbury United Church of Christ and Rayman Church of the Brethren.

He was a volunteer with the Retired Senior Volunteer Program since 1986, accumulating over 17,000 hours as follows: Chaplain at Meadow View Nursing Home, Salvation Army, Special Olympics in bowling and winter sports, visited hospitals in Meyersdale, Somerset, Bedford, Johnstown, and Cumberland, Berlin Food Pantry, and visited nursing homes, personal care homes, assisted living homes, and many family homes on a regular basis. He received recognition for volunteering from PA State Senate and President of the United States Award for over 4,000 hours of volunteer services.