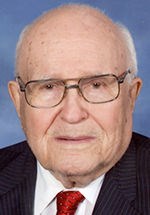 He served 67 years of continuous service as a Methodist clergyman, first in the former Erie Conference of the Methodist Church, at Bemus Point, NY and Kingsley in Erie; then at Franklin First UMC, Franklin Street UMC in Johnstown; Greenvlle First, and Old Salem UMCs; before moving to the Washington District. After serving five years at Washington First UMC, he retired from active ministry in 1990, but was called back to serve First UMC in Houston from 1993-2004. In October 2004, he was appointed to serve a year as interim pastor at John Wesley UMC in Washington, then remained as pastor until 2013.

A member of Washington Lodge 164, F&AM, where he served as worshipful master in 1991, he also was a member of many other local Masonic bodies and held many statewide Masonic positions. The Rev. Knappenberger had the honor of being coroneted a 33rd Degree Mason, Honorary Member of Supreme Council. He appreciated the privileges and opportunities for service Freemasonry had given him. He received much more than he could ever have given in return. The Rev. Knappenberger did what he could for as long as he could. It was a privilege for him to know he was part of something that was eternally worthwhile.

The Rev. Knappenberger enjoyed all kinds of music, singing and playing the trumpet. He loved to garden and travel. He liked interacting with people and learning from them. He was a kind and gentle soul and will be dearly missed.

Friends will be received from 2 to 4 and 6 to 9 p.m. Saturday in Warco-Falvo Funeral Home Inc., corner of Wilson and East Katherine avenues, Washington.  An additional visitation will be held from 2 to 3 p.m., the time of service, on Sunday, September 9, in First United Methodist Church, 213 East Pike Street, Houston, PA 15342, with the Rev. Brenda Walker officiating. Interment will be private.

Those attending the service are asked to go directly to the church on Sunday. Washington Lodge 164, F&AM, will render a Masonic service at 7:30 p.m. Saturday in the funeral home.

In lieu of flowers, memorial contributions may be made to Washington-Greene County Blind Association, 566 East Maiden Street, Washington, PA 15301, or at www.wgcba.org.

Condolences may be expressed at www.WarcoFalvoFuneralHome.com.