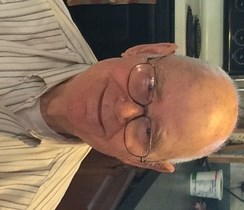 On Dec. 18, 2015, Sgt. Loyal W. Kelso, one of the remaining veterans of World War II and also of "The Greatest Generation", heard the call from "The Commander-in Chief of Heaven's armies" to report for duty. His response was, "Yes, Sir, I am on my way!" With those words, he left this world for his new assignment in the future world, serving his new "Commander-in Chief", Almighty God.

After serving in the U. S. military from 1942 - 1951, he heard a call to ministry while living in Baltimore and working on the Pennsylvania Railroad. He attended Wesley Seminary, was ordained and served 35 years of active ministry in Maryland and Western Pennsylvania before retiring in 2005.

Rev. Kelso was born on April 27, 1923, the son of the late Willis A. & Violet (Koch) Kelso. He was married to Alva Patterson on November 21, 1952, in the 43rd Street Presbyterian Church in Pittsburgh, Pa.  In addition to his loving wife Alva, he is survived by one daughter, LuAnn (James) Boyd of Clarksville, Pa; two sons, Mark W. (Marilyn) Kelso of Cumberland Md., and Michael A. (Brandi) Kelso of Schellsburg, Pa. He is also survived by his sister Helen Clokey of Bullhead, Arizona, 12 grandchildren, 10 great grandchildren, 3 great great grandchildren. He was proceeded in death by his parents, a sister (June), two brothers (Walter and Arthur), an infant brother and his daughter-in-law, Rachel.

During World War II, he served from January 8,1942 until September 5,1945 in the Army Air Corps, the 12th Air Force, the 562 Signal Aircraft Warning Battalion. On November 8, 1942 he participated in "Operation Torch", the invasion of North Africa by American forces, whose mission was to attack the Germans from the west while the British attacked the Germans from the east. With the Germans caught between the American 5th Army and the British 8th Army, they eventually surrendered, thereby ending the African campaign. Then came the invasion of Sicily and later, Italy. He served in a total of six major campaigns in Africa, Sicily, and Italy. He was honorably discharged at Fort Indiantown Gap on September 5, 1945.

He also served in the United States Air Force from December 26, 1947 until August 29, 1951 as a staff sergeant and assistant to wing Chaplain Major Roy C. Davis of the 5th Fighter Wing, Alaska Air Command, Anchorage, Alaska. He later served as an assistant to Major Oscar E. Bryn Jr., Chaplain of the 2225th Overseas Replacement Depot, at Fort Dix, New Jersey.

While living in Baltimore Maryland, he worked as a freight conductor on the Pennsylvania Railroad for 17 years. It was during this time that he heard the call to ministry and began his studies to become ordained. He attended Wesley Theological Seminary and on June 5, 1970 he was consecrated in the National Cathedral in Washington D.C. to the "Ministry of Word, Sacrament and Order". He was ordained a deacon by Bishop John Wesley Lord by the "Laying on of hands", as a minister in the United Methodist Church. During his 35 years of active ministry he served congregations in Maryland and Western Pennsylvania until his retirement in November of 2005. In Western PA, he served Brownsville: First/West Bend February 1972-1975; East Brook/Greenwood 1975-August 15, 1982; Hyndman: Grace/Cooks Mill August 15, 1982-1985; and Hyndman Larger Parish: Hyndman: First/Bethel: Gravel Pit/Cooks Mill/Palo Alto/Wellersburg: Mount Harmony from 1985- 1987.

He had heard and answered God's call by serving others in the name of Jesus Christ. As one group wrote about his ministry, saying, "We understand that our Lord had called you to service. We are grateful that we have experienced your love of the Lord and that you shared that love with us." He will be missed by many, but especially by all who experienced his love and ministry as he traveled the road that his Lord laid out for him as an ordained minister of "The Gospel of Jesus Christ".

With his God-given mission accomplished, his final message to those he loved and served are, "I'll see you in the morning, on the day that God calls you into His presence in Heaven for eternity. Where you will be greeted by your Heavenly Father, by Jesus Christ His Son and your Savior, and by the Holy Spirit. Along with your family members and friends who are already in His presence."

A Funeral Service was held at Grace United Methodist Church in Hyndman on December 23, 2015 with Pastor Bob Nagy officiating. Interment was at Hyndman Cemetery.  Arrangements were entrusted to Mickle-Geisel Funeral Home, Schellsburg.