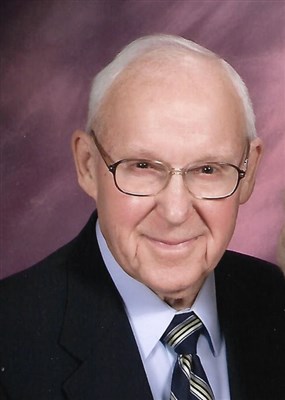 Rev. Harold Ray “Hal” Kelly, 94, of Meadville, a former missionary, pastor and District Superintendent, passed away peacefully on September 13, 2019 with his wife of 70 years, Peggy, by his side.

As a Navy Hospital Corpsman, Hal served with the US Marines in the Pacific and China at the end of WWII.  He was a 1950 graduate of Grove City College, where he was a stand-out center and linebacker on the football team and met the love of his life, Peggy Jean Samson.  They were wed on June 11, 1949.

Hal graduated from Drew Theological Seminary in 1953 and was ordained into the Methodist Church at Stone Methodist Church in 1953.  He and Peggy were commissioned as missionaries at that time and served in Brazil from 1953-1958.  He then served as a pastor at South Harborcreek, Erie Wayne Street, Erie Trinity, and First UMC in Titusville, before being named Franklin District Superintendent in 1971. He served in the post until 1977, when was appointed pastor of First UMC in Warren, where he served until moving to Asbury UMC in Erie in 1980. He retired from active ministry in 1987.

Upon retirement the Kellys lived in Mayville, NY in the home that Hal built for them over the years.  He loved Chautauqua Lake, fishing, gardening, woodworking, watching football and traveling.  In 2007 the Kellys moved to Wesbury United Methodist Retirement Community.  He led a life of sacrifice and service, touching and influencing the lives of many people in the churches he served and in the communities where he lived.

Interment with military honors will be in Wintergreen Gorge Cemetery, Erie, PA.

The family suggests memorials be given to Habitat for Humanity (www.habitat.org) or to the Wesbury Foundation’s Benevolent Care Fund, 31 North Park Ave., Meadville, PA  16335.

Memories and condolences may be shared at www.waidfuneralhome.net

DONATIONS MAY BE MADE TO: