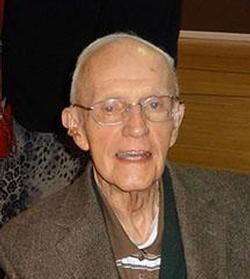 Rev. Earnest Hummer of Lewisberry, pastor and former president of China Outreach Ministries, died on Tuesday, December 15 after a fall at his residence.

Rev. Hummer was a man of God, passionate about reaching the lost for Jesus, and kind and loving to all. He was a man of prayer, praying for God’s will and blessing, provision, and grace for so many throughout the years.

He and Ruth, his wife of 65 years, served in the pastoral ministry for many years before coming to lead COM, and from 1982 to 2001, he served as the President of COM. They lived many of those years at the COM Fairfax House, hosting Chinese students and scholars and sharing the love of Jesus with them.

Under his leadership, COM placed its first campus worker at the University of Pittsburgh in 1988. Today there are ministries to Chinese at over 50 universities. As one COM staff member shared, “When Earnie would humbly talk about how the Lord led him to initiate COM's campus ministry, he would often shake his head in amazement that the Lord would use him in such a powerful and significant way.”

As President Emeritus, he continued to champion the cause and supported and prayed for the ministry We all miss him, and pray for God’s comfort for his dear wife Ruth. We know that he has heard these words from His Master and Savior: “Well done good and faithful servant! Come and share your master’s happiness.”

Born August 20, 1925 in Catonsville, MD, he was the son of the late James E. and Catherine (Wrightson) Hummer. He is survived by his wife of 65 years Ruth (Hamilton) Hummer; a son William Hummer of York Haven; a daughter Kathy McCardle and her husband Michael of Lewisberry; three grandchildren Austin and his wife Liesel of Williamsport, Barton of Lewisberry and Hannah Rohrs and her husband Tyson of Shiremanstown and two great grandchildren Talon and Selah McCardle of Williamsport.

Rev. Hummer graduated from BelAir High School in Maryland and attended Ft. Wayne Bible School in Indiana. He was a graduate of Asbury Theological Seminary in Kentucky and Westminster College in Maryland with a degree in Sacred Theology. Rev. Hummer concluded his education by receiving his Master’s Degree from Temple University in Philadelphia.

For 33 years, Rev. Hummer served first as a pastor in the Baltimore Conference in Joppa, MD and Fawn Grove. He transferred to the Methodist Erie Conference where he was ordained an elder and serve the Falls Creek Charge before moving to Wesley Church in Erie, where he served 24 years from 1968 to 1982. His greatest joy was introducing missions in each church, providing an opportunity to spread the Gospel of the Lord.

Rev. Hummer was a tireless servant, an avid reader, and enjoyed studying. He had a Home Bible Study for a number of years, where he taught the Scriptures. He was responsible for bringing the Leighton Ford Crusade to the Erie area in 1970. During his pastorate in Erie, there were 26 men and women who went into full-time Christian service.

In 1982 he assumed the leadership of China Outreach Ministries, which was responsible for the placing of staff at university campuses to reach scholars from China with the Gospel. Rev. Hummer became President Emeritus of COM in 2001. In the years following, he and Ruth served in the Development part of COM, thus serving the organization for 30 years.