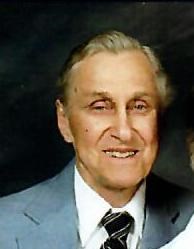 Born July 6, 1925 in East Orange, New Jersey the son of the late Herbert J. and Marion (Smith) Hinrichsen. Bob graduated from High School in Orange, NJ in 1943 and Columbia and Tufts through the Navy V-12 program. He served as a Lieutenant on a destroyer escort in the Pacific in WWII.

Bob was employed for over 35 years as an electrical/chemical engineer for GTE-Sylvania. While working for Sylvania he returned to college and earned his MBA. Upon retiring from Sylvania, Bob again returned to college to obtain his Master of Divinity degree from Unity Seminary in Indiana. He was licensed to preach and served a church in Richmond, IN while completing seminary. In Western PA, where he was receive as a probationary member in 1983 and ordained an elder in 1986, he served the Juneau: Valley Chapel/Rochester Mills/Rossiter: Calvary/Saint Marks Charge for four years; Youngsville: Evangelical UMC from 1988-1991 and New Paris UMC from 1991-1996, when he retired.  In 1996, he was appointed to serve the Wolfsburg Charge in the Central Pennsylvania (Susquehanna) Conference until 2005.

After retirement, Bob and his wife Helen did mission work for in Central and South America.

Bob was an avid runner and walker and loved downhill skiing with his family. He never passed up an opportunity to ski at Blue Knob. Bob was very involved in Boy Scouts his entire life, serving as Council President in Maine and Pennsylvania. He also was involved in Gideon's International, helping to distribute Bibles.

Bob is survived by his wife of 68 years, Helen Lowry Wilcox Hinrichsen of Davidsville PA, and two sons, Harry and wife Linda of East Barre Vt and William and wife Nancy of Haddonfield, NJ. He is also survived by grandchildren Eric, Michael, and Niall.

There will be no viewing at his request. Inurnment in the West Branch Cemetery in Stony Fork PA will be at a later date. The family is being served by the George E. Mason Funeral Home, Inc. Davidsville, PA.

To leave condolences for the family please visit www.georgemasonfuneralhome.com