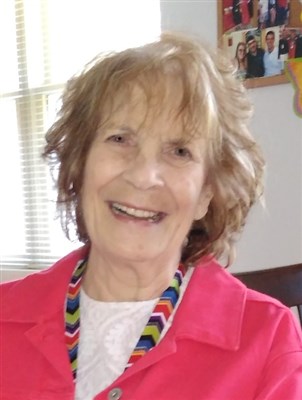 Nancy L. Henderson passed away peacefully on Sunday, June 20, 2021 at UPMC Horizon – Greenville. She was the wife of the Rev. Richard Henderson, a retired elder.

Born on December 16, 1938, in Derry, the daughter of Anis Toumah and Lucy Agnes Moore Anderson, she graduated from Derry Township High School in 1956 and Slippery Rock State College in 1977. Nancy retired from the Hermitage School District in 2007 after working 22 years as a learning support teacher, and “loved every moment of it.” Prior to working in Hermitage, she worked as an elementary school teacher for the Iroquois School District in Erie from 1980 - 1984.

Nancy is survived by her loving husband Richard, whom she married on July 17, 1959. They met at church when Nancy was 13 and Richard was 15, and were three weeks short of celebrating their 62nd wedding anniversary.
She is also survived by daughter Diane Brest (William) of Hermitage, and sons Richard (Cynthia) of Pittsburgh and David (Theresa) of Indiana, PA., grandchildren Anthony Hita, of Doylestown, Kendall and Carly Brest, of Hermitage, Jimmy Henderson of Pittsburgh, David (Madison) Henderson of Cranberry Twp., Adam Henderson, of Ft. Drum, NY, Christian Henderson, of Indiana, PA, and Sarah (William) Ockerman, of Eglin Air Force Base, FL. She is also survived by one brother, Dean Anderson, of Derry.

Nancy loved her family, especially her 8 grandchildren. Always one to remember birthdays and anniversaries, she created many lasting memories, especially with several entire family cruises and vacations to Florida. Her friends were an important part of her life and she maintained connections with several of them throughout the years. However, she truly adored her monthly times spent with her “retired teacher friends.”

Nancy looked forward to her regular vacations to Mexico and Bethany Beach, watching Pittsburgh sports teams, tending to the many flowers around her home and spending time with her grand-dog “Ace.”

From an early age, her faith in Jesus was foundational in her life and because of that faith, Nancy is now resting secure in the arms of her Savior. “The time for my departure is near. I have fought the good fight, I have finished the race, I have kept the faith. Now there is in store for me the crown of righteousness, which the Lord, the righteous Judge, will award to me on that day—and not only to me, but also to all who have longed for his appearing.” (II Timothy 4:6-8, NIV)

The family asked that in lieu of flowers, donations be made in Nancy’s name to St. Paul’s Jones Serenity Neighborhood 339 East Jamestown Rd. Greenville, PA 16125.

Online condolences may be expressed at www.shermanfuneralhome.com