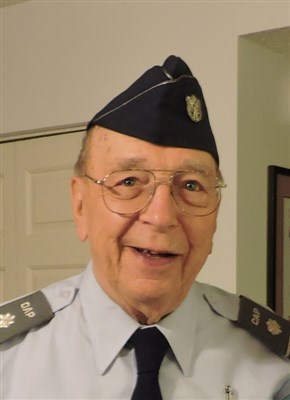 The Rev. Dr. Jack Levi Hemskey, 85, who served as a pastor for 50 years before retiring in 1993, went to his heavenly home on December 11 at Oak Grove Manor Assisted Living in Waynesboro, Virginia.

Ordained an elder in the Evangelical United Brethren Church in 1959, he pastored churches and charges in Ohio and in Jeannette, at Scenery Hill/Davidson  Saegertown/Blooming Valley; Aspinwall: Community/Blawnox; Creighton: Janes 1987-1990; and Cabot. He also served six years as chaplain at Westmoreland Hospital.

Born November 22, 1931 in Cambria County, PA, the son of John and Eva Hemskey (Gates), he was proceeded in death by his parents and four siblings.

Following his retirement, he and Delores moved to Vero Beach, Florida for 16 years. During this time he enjoyed barbering and fishing, as well as receiving his pilot license and serving in local churches. He and Delores moved to Fishersville, VA in 2007, where he continued to enjoy flying, fishing and serving as a Chaplain for Augusta Health. In 2016, he was recognized for over 35 years of service as a Chaplain for Civil Air Patrol (CAP). Family celebrations, including 13 dogs, were always very important to him.

At the request of family, a private service will be held. There will be no public viewing.

Those wishing to honor his memory may donate to one of the following organizations: Trout Unlimited, Augusta Health Auxiliary, or St. Marks United Methodist Church. For more information, view the obituary online at charltonandgroomefuneralhome.com.