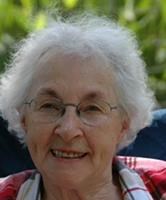 A Memorial Service for Ruth Ellen Diehl Feagin Gordon, 95, who died in Greensburg, PA on Tuesday, Jan. 12, 2021 of COVID-19 side effects, will be held at Christ United Methodist Church in Youngwood, PA on Saturday, May 14, 2022 at 1 p.m.  Born at her parents’ farm in New Stanton, PA on Feb. 4, 1925, she was the third of six children born to Clarence Diehl and Amelia (Weston) Diehl.

Ruth graduated from Greensburg High School in 1942 and attended Asbury College in Wilmore, Kentucky the following year.  There she fell in love with a fellow student, Olin B. Feagin, Jr.  Both delayed further college after the freshman year, Olin to enlist in the Army and Ruth to do factory work.  They were married on July 25, 1944, shortly before Olin was deployed to Italy.

Olin returned from WWII in 1946 and completed college and seminary while serving as student pastor for Evangelical United Brethren churches in Pennsylvania and Ohio, with Ruth at his side.  He graduated from United Theological Seminary in 1959 and was appointed to Arlington Ave EUB Church in Pittsburgh.

Olin died unexpectedly in his sleep on June 6, 1961, leaving Ruth with four children aged 5 to 14.  She moved the family to her parents’ farm for a year.  During that year, she learned to drive a car and handle finances, became a licensed practical nurse, got a job, and bought a house in Youngwood, PA.  There she completed raising the children.

In 1986, Ruth married Rev. John (Jack) Gordon, a retired United Methodist minister.  He joined her in the Youngwood house and Ruth continued to live there after his death in 1994.  In 2019, she finally left her beloved house, moving to Easy Living in Hunker, PA.

Ruth was predeceased by her parents, her four brothers (Clarence, Robert, David, and Richard), her sister (Phyllis), both husbands, a daughter and son-in-law (Mary and Louis Conde), and a granddaughter (Christine Feagin).

In a life filled with losses and challenges, Ruth’s abiding faith in God and her innate grit and determination gave her the strength and fortitude to carry on and to continue to find joy in life.  She met people with a smile and a hug, exemplifying kindness and support, and loved to laugh.  A memorial service was scheduled for 1 p.m., Saturday, May 14, 2022 at Christ United Methodist Church in Youngwood, PA.  For the full obituary, visit nyefuneralhome.com/obituary/Ruth-Gordon