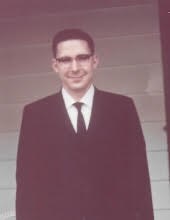 Rev. William C Gawlas, 83, of Pittsburgh, formerly of Castle Shannon, passed away suddenly in his sleep at home on March 11, 2021.

William was a passionate lover of music especially jazz. He was a singer, musician and tap dancer. He served as a pastor for urban churches in the Pittsburgh Methodist conference beginning in the 1960s and later worked for agencies in the city. He returned to pastoral ministry in 1993 at the Noblestown/Federal Charge and also served the Monessen/Webster Charge from 1996-2002, when he retired.

Visitation will be held on Monday, March 15 at the JEFFERSON MEMORIAL FUNERAL HOME, INC., 301 Curry Hollow Rd., Pleasant Hills, 15236. Memorial contributions may be made to your favorite Alzheimer's or Dementia organization. Condolences may be left at www.jeffersonmemorial.biz.