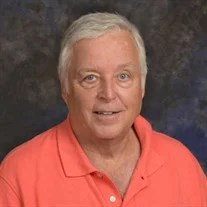 Wyatt Fitzgibbons, 75, of Smithton, went to be with the Lord on Sunday, January 15, 2023 in UPMC Presbyterian Hospital. A son of the late David A. Fitzgibbons and Isabel Popp Fitzgibbons Monk, he was born on September 7, 1947 in Homestead. Previously a resident of Whitaker and Elizabeth Twp., Wyatt has been a resident of Smithton since 1987. He has belonged to various United Methodist churches with his wife where he was a certified lay speaker, a member of the Methodist choir, and helped with youth groups, being very supportive of his faith wherever he went. Throughout the years, Wyatt was also a member of the Elizabeth Forward community chorus, numerous golf, bowling, and softball leagues, and the Omni Masonic Lodge 509, where he was a member for nearly 50 years. A U.S Navy Veteran, Wyatt retired in 2009 from U.S. Steel, Irvin Works after 37 years. He is survived by his wife of 34 years, Pastor Sandy (Wiskemann) Fitzgibbons and their son, Robert Fitzgibbons and his fiancé, Mary Dzubak of West Newton. Also surviving are three sons, David (Shannon) Fitzgibbons of West Mifflin, Steven (Heather) Fitzgibbons of West Newton, and Richard Fitzgibbons (Lisa Burgess) of Whitaker; three grandchildren, Dustin, Carly, and Galen Fitzgibbons, a brother in-law, Bob (Cathy) Wiskemann and his only nephew, Patrick Wiskemann, all of Wexford, and his former wife, Dorothy Fitzgibbons of Elizabeth.

Friends will be received on Wednesday from 2 to 4 P.M. and 6 to 8 P.M., the time of the funeral service in the Ferguson Funeral Home and Crematory, Inc., 700 Broad Avenue, Belle Vernon. 724-929-5300. www.FergusonFuneralHomeandCrematory.com. Pastor Sandy Fitzgibbons will be officiating. Interment will be in the National Cemetery of the Alleghenies at a later date. Members of the Omni Masonic Lodge 509 will gather in the funeral home at 7:30 PM to hold services. In lieu of flowers, memorial donations may be made to St. Jude Children’s Research Hospital, www.stjude.org.