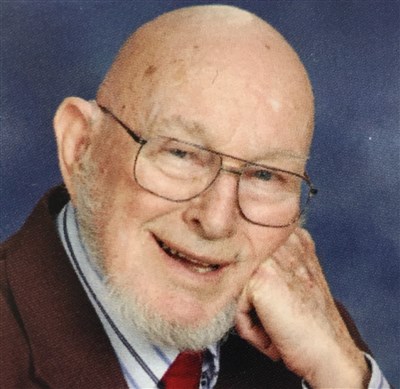 The Rev. Victor Lemoyne Brown, 94, of Perry Township went to be with the Lord, and his beloved wife and childhood sweetheart Molly on Friday, Jan. 20, 2017. He died peacefully at his home in Sleepy Hollow.

An educator who felt God's call into the Ministry in 1957, Rev. Brown was both a teacher and preacher until 1965, when he resigned from teaching to go full time as a United Methodist pastor. He served churches throughout Western Pennsylvania, including Clark: Trinity, Shenango Charge, Dormont, Turtle Creek: McMasters, Meadowlands/Fawcett 1985-1992, Wampum/Newport 1992-1997 and Parker/Bruin. Later he served churches in Gainesville, Florida, until he retired at the age of 80.

Born on April 5, 1922, in Gainesville, Florida, while growing up, he lived in Gainesville during the school year and at Sleepy Hollow during the summer.
His father, Richard Dewitt Brown, was the music director at the University of Florida. His mother Mabel Hawthorne Brown was an accomplished musician and artist.  He married Molly Omega Morrow on Sept. 22, 1942.

Vic was a graduate of the University of Florida, obtaining bachelor's and master's degrees. He also earned a master's of Divinity from Wesley Theological Seminary.

He entered active duty in the Army on his 21st birthday, and earned the rank of staff sergeant, serving stateside until the end of World War II.
After the war, he held jobs with A&S Railroad and Aetna Standard, until he was hired to teach English at Lincoln High School in 1952. He was chairman of the philosophy and English departments, and he helped to create the school's philosophy.

One of the highlights of his teaching career was being the class sponsor for the class of 1958. He continued to stay connected to them, attending class reunions.

Vic was an accomplished violinist and violist. He played for many years with the Carnegie Civic Symphony, now the Pittsburgh Civic Orchestra. He was a poet, an avid hiker and camper, and loved driving. He learned to fly Ultralight airplanes at the age of 72.

He and Molly cherished riding a motorcycle together, taking trips of more than 6,500 miles at a time. Until this past year, he would get in his Jeep and drive for hours, usually to the mountains.

Funeral arrangements have been entrusted to the Joseph A. Tomon Jr. Funeral Home and Crematory, 97 Grim Ave., Ellport.